The nation\'s state of economic uncertainty and the recent school shooting that struck the town of Sandy Hook just two weeks ago are having no affect on area gun sales. In fact, gun sales are booming and tickets to gun shows are a hot item.
Listen now to WTOP News WTOP.com | Alexa | Google Home | WTOP App | 103.5 FM
(1/5) 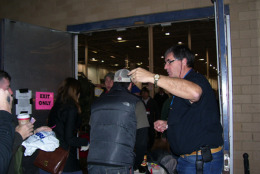 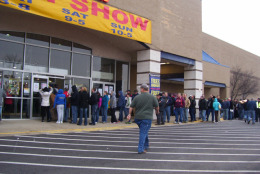 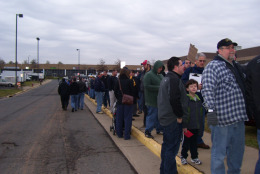 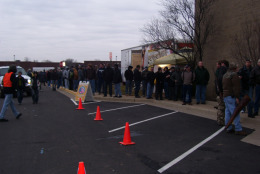 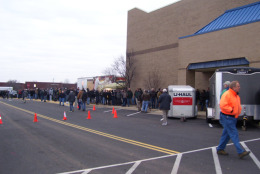 WASHINGTON – The nation’s state of economic uncertainty and the recent school shooting that struck the town of Sandy Hook just two weeks ago are having no affect on area gun sales. In fact, gun sales are booming and tickets to gun shows are a hot item.

Elliott and her husband are the organizers of the gun show currently taking place in Chantilly at the Dulles Expo Center – one of the biggest gun shows held in the D.C. area since the Connecticut school shooting.

Elliott says the gun show’s attendance has doubled since the shootings and since recent conversations of gun control.

The rise in gun show customers is not limited to the D.C. area.

Last weekend, the couple organized gun shows in Salem, Va., and in North Carolina, where attendance was also double from what she saw last year at the same time.

“We’re talking to promoters, there are two other large promoters in the nation and we’re all seeing the same uptick,” says Elliott, who added that prices for the guns have increased with the demand.

Laila Barakat waited in a long line to get into Saturday’s Chantilly gun show. She wants to add to her gun collection and she is concerned about the talk of gun control.

“It hasn’t worked in the past, but just in case,” says Barakat on potential gun control laws.

Craig Van Gorder is an exhibitor at the gun show, where he sells and trades firearms. Comparing gun show crowds from last year to this year, he says he has seen a sizable increase.

“The amount of people waiting to get in – there were about 5,000 people (on Friday),” says Van Gorder. “The fear is that they are going to start banning our guns and people are worried about protecting their families.”

Elliott agrees that people are worried.

“Since (the shootings), we’ve had four shows and each week it gets stronger and stronger,” she says. “More people (are) coming and more people (are) buying – a lot of new customers, folks that realize that this could get real serious. What the average person perceives is that they’re going to come take my rights away to protect myself.”

The next Nation’s Gun Show in Chantilly is scheduled for Feb. 8, 9 and 10, and the show will grow in the future.