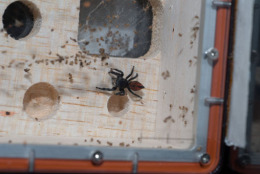 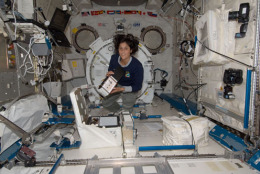 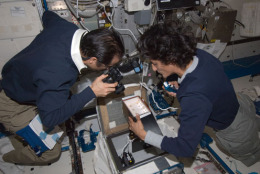 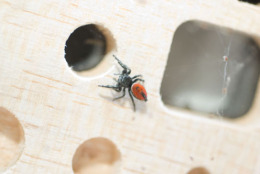 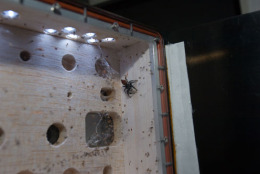 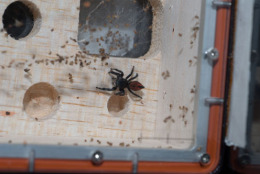 WASHINGTON – The National Museum of Natural History announced that Nefertiti, the “spidernaut” died Monday before the museum opened to the public.

A member of the Insect Zoo staff discovered the spider had died of natural causes.

The “spidernaut” lived for ten months. The lifespan of the species known as p. johnsoni can typically reach up to one year in length.

Smithsonian released the below statement:

The unexpected loss of this special animal who inspired so many imaginations will be felt throughout the Museum community. The body of Nefertiti will be added to the Museum’s collection of specimens where she will continue to contribute to our understanding of spiders.

WASHINGTON – The subject of a worldwide space experiment has taken up residence in the District.

Nefertiti, the first spider to fly in space, has a new home at the Smithsonian’s Museum of Natural History. And on Thursday, Dan Babbitt, acting manager of the Insect Zoo and Butterfly Pavilion, welcomed an enthusiastic crowd of children to meet the “spidernaut.”

Nefertiti was part of an experiment proposed by 18-year-old Amir Mohamed, from Alexandria, Egypt. Mohamed won a worldwide science contest when he questioned whether the jumping spider would be able to hunt in a microgravity environment. The teenager was given the chance to conduct the experiment after proposing it on YouTube.

Mohamed thought “Neffi” would not be successful. But when the experiment was performed by astronauts on the International Space Station, the Phidippus Johnsoni species of spider adapted, Babbitt says.

“She was able to hunt, but in a different way,” Babbitt says. “She kind of sidled up to her prey very slowly and grabbed them instead of doing her normal leap.”

Babbitt says the spider is doing fine. Nefertiti will be on display at the museum’s Insect Zoo, as she is no longer called upon to fly into space. Many children in the crowd, like 5-year-old Sophie, thought it was very cool.

But if the spider tried to jump on Sophie?

“It would scare me!”