Romney’s Big Bird comments spark response from the bird himself 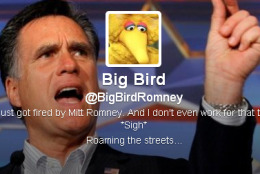 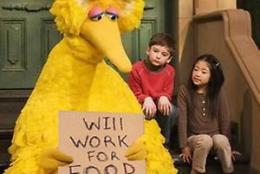 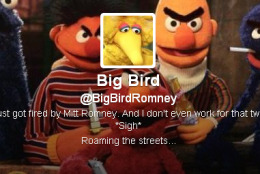 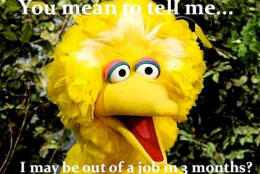 “I’m sorry, Jim. I’m going to the stop the subsidy to PBS. I like Big Bird. I like you,” Romney said.

Within an hour of setting up the Twitter handle @BigBirdRomney, the Sesame Street icon had nearly 6,000 followers. Just before midnight he had more than 7,300.

Through the debate Big Bird expressed anger, concern and even saddness that the Republican presidential candidate wanted to put him, and his friends from the Street, out of work. And he wasn’t shy about sharing his endorsement for president.

“If you don’t vote Obama, Mitt Romney is going to be eating me by the end of November.”

However, in a cryptic Twitpic, the Bird seemed to suggest he and Ann Romney had a “thing” at one point – but he didn’t elaborate.

When asked via Twitter if he felt better after seeing the support he’d earned, @BigBirdRomney responded directly to WTOP saying:

“I’ve stopped crying. Need to save my tears for the unemployment line tomorrow…”

Check out some of his most retweeted and favorited quips:

@mittromney just DM-d me. He told me if I don’t shut my beak, he’s going to tie me to the roof of his car. =(#Debates

Under Mitt #Romney, Cookie Monster won’t receive the care he needs to overcome his addiction. #FactCheck.#Debate2012

Mitt Romney just mentioned the Middle East. As a bird from that part of the world, I am appalled.#Debate2012 #BigBird

The bird even made his own political commitments:

The Romney campaign has yet to respond to Big Bird’s requests for comment or clarification.

@BigBirdRomney can also be contacted through bigbirdromney@gmail.com, and he’s already making headway on his potential 2016 presidential bid.