Wounded warriors make a splash for a good cause 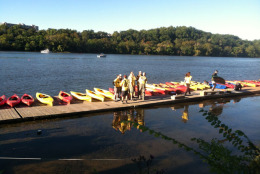 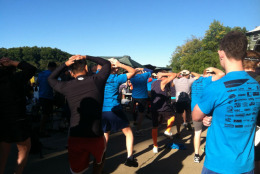 WASHINGTON – It was race day for more than 200 military veterans and volunteers who suited up for the seventh annual Team River Runner Biathlon.

The biathlon was a fundraising event to support the non-profit, Team River Runner, which supports wounded active duty service personnel and veterans of the Iraq and Afghanistan wars.

Beyond the physical limitations the wounded warriors face every day, “sometimes the greatest challenge is just getting out of bed,” says Dana Larcenaire, one of the event coordinators.

The biathlon included a one-mile kayak down the Potomac River and a three-mile run along the Capital Crescent Trail.

“They quickly figure out it doesn’t matter how many legs you have or scars on your head. Anyone who gets into that boat for the first time is equal,” says Don Lange, a Marine Corps veteran who suffered a Traumatic Brain Injury. .

Several disabled veterans and active duty service members took part in the race, while others volunteered.

Sebastian Gallegos, a corporal in the Marine Corps, has a prosthetic right arm, but that’s not stopping him.

The annual fundraiser for the eight year old non-profit raised more than $200,000 Sunday.

Below is video from Sunday’s biathlon:

The Team River Run website notes that wounded warriors, after enduring months of surgeries, physical and readjustment therapies, prosthetic fittings and other life changes, “are attracted to whitewater and adventure kayaking because it offers an exciting way to improve their health, strength, and connection with nature.”

“Before (Team River Runner), I was sitting at home, dealing with depression,” says Michael Bradley, a retired Army Staff Sergeant.

“Being able to get out has been the best thing for me,” he says.