Holidays: Where to see holiday lights | 4 ways to limit your holiday debt | Inflation 'definitely a guest' at holiday celebrations this year | Recipes for Thanksgiving leftovers
Home » Latest News » When will Teddy win…

When will Teddy win the Presidents Race?

The slow, stumbling and all-around unfortunate racing president has compiled a record of 0-523 since the Nationals arrived in the nation\'s capital. With the Nats in the playoffs, is his chance around the corner? But is that about to change? Will the unblemished record of defeat be broken?
Listen now to WTOP News WTOP.com | Alexa | Google Home | WTOP App | 103.5 FM
(1/7) 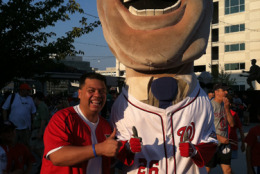 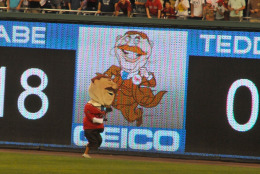 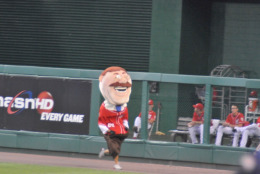 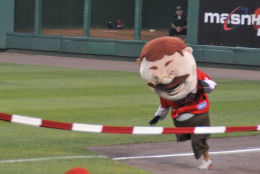 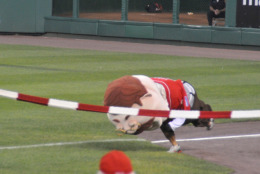 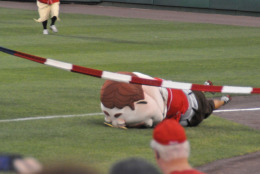 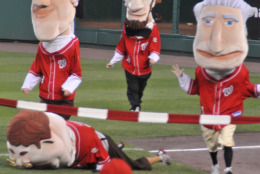 Submit photos of you with Teddy.

WASHINGTON – The latest campaign slogan to hit Washington has set off rumors and speculation: “Teddy in 2012.”

The slow, stumbling and all-around unfortunate racing president has compiled a record of 0-523 since the Nationals arrived in the nation’s capital.

But is that about to change? Will the unblemished record of defeat be broken?

The answer comes next week during the Nationals’ final series of the regular season.

“We believe what’s going on at Nationals Park is a little bit of a tragedy given that Theodore Roosevelt was one of the greatest presidents in the history of the United States,” says Scott Ableman of the blog “Let Teddy Win.”

His effort has never been tongue-in-cheek. He believes the compilation of failures displayed at home games isn’t consistent with the vision and accomplishments of America’s 26th president.

“And yet a generation of young people in Washington is being brought up to think of him as nothing but a lovable loser,” he laments.

But “Teddy in 2012” leaves room for hope, and the Nationals’ promoters aren’t much for subtlety in suggesting the racing president will have a big week in the final three games of the season.

In each of the games, the Nationals’ promotional giveaway involves Teddy, including a bumper sticker and a lapel pin.

“It seems like the time is right,” Ableman says.

“There’s never been a better time to let Teddy win.”

Opinion is divided as the Nationals bring the region postseason baseball for the first time since 1933.

Some say a Teddy win would throw off the mojo. And baseball is nothing if not superstitious.

Ableman takes the other side, arguing this would be the quintessential win.

“Maybe they don’t have success in the playoffs until they let Teddy win,” he speculates.

Then there’s the question: What would happen if he does win next week? Will the inexplicable love for Teddy fade?

“As for what I would do, [I] will probably pop a bottle of champagne, maybe light up a cigar and have a big party, but then go right back the next day to recording what’s happening in the President’s Race,” Ableman says.

There’s so much to debate, fret about and wonder before the season’s final series.

And perhaps that illustrates the biggest point of all. Would such anticipation matter – or even exist – if the Nationals weren’t taking this town to the playoffs?

Of course, WTOP has to offer up a little Teddy video:

Click here for more videos of the Presidents Races.