A fish that fights hard when it\'s on the line is showing up in the Potomac River, near the Woodrow Wilson Bridge.
Listen now to WTOP News WTOP.com | Alexa | Google Home | WTOP App | 103.5 FM
(1/4) 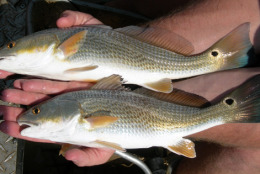 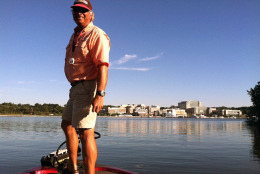 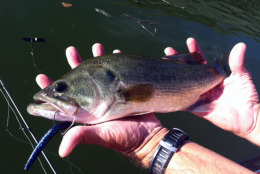 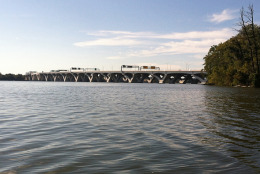 “I was in Pohick Bay with a buddy last week, and we were all of a sudden surrounded by these fish. Big waves of fish (were) coming toward us and we were looking and it was kind of diminished light, we couldn’t see really well,” says Potomac River bass fishing guide Steve Chaconas.

“But when we got a good look, we said ‘those look like redfish.’ And then we started asking around, and we found that yeah, people are catching redfish here in the Potomac River.”

The redfish, also known as red drum or puppy drum, is a popular sport fish living in both saltwater and brackish water. They’re silvery colored with a spot near the tail.

“When you do mention redfish in the Potomac River to any angler, they get excited. That’s a species that fights really hard, fights much harder than any of the native species that we have here in the Potomac. It adds excitement to the guys who will travel to try to catch these fish. Where they would normally have to go to the Chesapeake Bay or go somewhere around saltwater, now they can just come right here in their backyard,” says Chaconas.

Chaconas, who’s out fishing on the Potomac almost every day, was really surprised by the newcomers, as are scientists.

“I’ve talked to biologists who have been tracking the river for many years and they’ve never, even though we’ve experienced high salinity levels in the Potomac River, they’ve never seen these puppy drum or red fish come this far up the Potomac, and up this far is up to the Woodrow Wilson Bridge,” he says.

There’s another sign that a lack of rain has made the river water particularly salty. The Potomac River is the source of drinking water for 5 million people in the D.C. region.

Chaconas says he hasn’t personally caught any redfish, but he says fishing for largemouth bass and Northern snakehead has been very good lately.

The Potomac River Fisheries Commission, which regulates the main stem of the river, limits the catch of redfish to five per person, with a minimum size limit of 18 inches and a maximum size of 25 inches.

Maryland’s Department of Natural Resources offers a look at what and where anglers are catching around the state.