Millions of years ago, Washington D.C. was beachfront property right along the Atlantic Ocean and much of our region was underwater.
Listen now to WTOP News WTOP.com | Alexa | Google Home | WTOP App | 103.5 FM
(1/3) 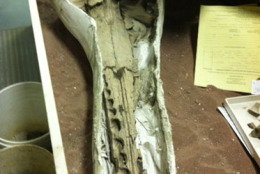 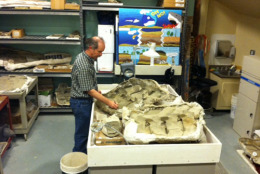 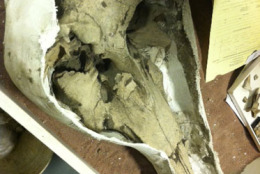 WASHINGTON – Millions of years ago, Washington D.C. was beachfront property along the Atlantic Ocean, and much of our region was underwater.

A fascinating fossil from that time was found earlier this year on a beach along the Calvert Cliffs in Maryland and is now at the Calvert Marine Museum. It’s a skull, almost 3-feet-long, of an extinct dolphin with a long, thin snout.

The museum’s curator of paleontology, Stephen Godfrey, says an amateur collector made the discovery in an area normally covered by water.

“The weather conditions were right so that the water in the Chesapeake Bay was very low. Both a high pressure system has pushed the water out, and the winds were blowing from the right [direction], so there was a very wide section of beach that was exposed,” says Godfrey.

“In this case, the top side of the skull was exposed, what we call the vertex of the skull. It’s up near where the blowhole would have been in the living dolphin.”

The amateur collector who spotted it used his cellphone to call the museum from the beach, and the skull was removed the same day. Godfrey says that’s a good thing, because the next high tide could have damaged it.

“You’ll notice that the skull is very three dimensional, it hasn’t been crushed by the weight of the sediment that entombed it. It’s essentially intact, there’s a few bones that … have been slightly displaced from their original configuration. We are missing the lower jaw, but the rest of the skull is really superbly well preserved,” Godfrey said, while showing the skull inside the museum’s fossil preparation lab.

The skull is about the size of a modern day killer whale skull, and Godfrey says this particular dolphin could be considered a great great grandfather of the killer whale.

The Calvert Cliffs extend for about 30 miles along the western shore of the Chesapeake Bay in southern Maryland and are famous for producing extraordinary fossils that are between 8 and 18 million years old.

“Because of the way the cliffs are exposed, we have this beautiful portal. And as the cliffs continue to erode, new fossils are coming to light all the time,” Godfrey says.

The fossils that arrive in the museum’s fossil preparation lab get a lot of very gentle cleaning.

“We’re very fortunate here at the Marine Museum because the sediments that entombed these fossils did not cement. When you think of people excavating for dinosaur bones, often you’ll see them using jackhammers or dynamite, other kinds of power tools, air scribes that are like little jackhammers driven by compressed air,” Godfrey says.

“For the most part, we don’t have to use any of those pieces of equipment because … the individual little grains of sand and silt were not cemented together naturally. They’re still essentially like they were when they were laid down, and so we can just use our fingernail to actually dig through the sediment. For the most part, it’s that soft. So as to not get dirt under your fingernails, what we typically use are dental scalers and brushes. And so the scalers are donated to use by local dentists,” he adds.

Those interested in fossils can check out the Calvert Marine Museum and its fossil preparation lab. It has a window that stays open so that volunteers inside can interact with visitors who have questions.

Another place worth checking out is Calvert Cliffs State Park, which is known as a good place to find shark teeth.