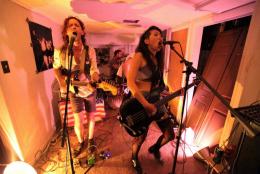 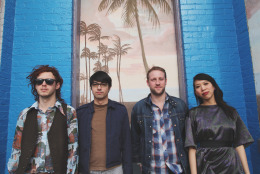 WASHINGTON – Local music fans are buzzing about Shark Week, and it has nothing to do with TV.

On Aug. 10, just before the start of Discovery Channel’s beloved Shark Week, a D.C. band with the same name released a new digital EP on the website Bandcamp.

The band’s sense of humor is reflected in the release date.

Led by frontman Ryan Mitchell, Shark Week’s brand of garage rock is just as refined as it is audacious.

“It all started off as a joke,” says drummer Dan Newhauser.

But soon, the band realized it was on to something.

Bassist Danielle Vu is quick to point out that the key to Shark Week’s sound is to follow their instincts without trying to reach for a specific genre.

“That’s one thing I really loved about joining Shark Week,” she says. The band never thought “we need to sound like The Kinks or Richard Hell. It was just very natural and organic.”

Shark Week marked the release of their EP with a well attended show at D.C. multimedia venue, Montserrat House.

“It just felt great to get that support from everybody,” Newhauser says. “It was really awesome and validating.”

Now that Discovery’s Shark Week has arrived, the band sees an influx of Twitter followers who mistakenly think that the band has something to do with actual sharks.

“Maybe there’s a little confusion there, but we’ll take it,” Newhauser says.

The band’s next concert is Sept. 22 at Velvet Lounge.