One dead in small plane crash in Montgomery County

A small plane crash near a tiny, rural airfield here has left a man described as an experienced pilot dead and a co-pilot fighting for his life in a trauma center.
Listen now to WTOP News WTOP.com | Alexa | Google Home | WTOP App | 103.5 FM
(1/1) 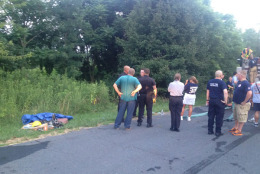 LAYTONSVILLE, Md. – A small plane crash near a tiny, rural airfield here has left a man described as an experienced pilot dead and a co-pilot fighting for his life in a trauma center.

Montgomery County 911 got the call about the crash near Davis Airport at about 7:20 Monday evening.

Robert Schapiro, an instructor from Clarksville-based Bootcamp Helicopters, was practicing maneuvers with a student at Davis Airport when he says he saw the single-engine plane go down into a thicket of trees near Pocahontas Road just after takeoff.

“He started a right turn to try to clear the trees on the right side, and it looked like he turned too far, stalled the airplane, and spun to the ground,” Schapiro said.

An apprentice aviation mechanic at the airport, Dennis Stiles, says he heard the plane backfire and drove out to the scene in his Jeep.

He says the pilot who died was a good friend of his, an experienced pilot with about 18,500 flight hours on his record.

“I’d gotten to know this man very well. He was old, and he had lived a very long and full, exciting life. I’d learned a lot from him,” Stiles said.

Stiles says the plane had passed its last annual inspection and was in good flying order.

Authorities aren’t identifying the victims until their families can be notified.

The Federal Aviation Administration is assisting Montgomery County Police and Fire and Rescue to investigate the cause of the crash.