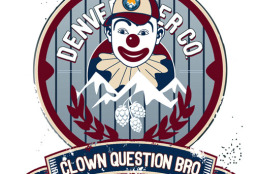 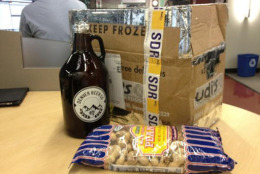 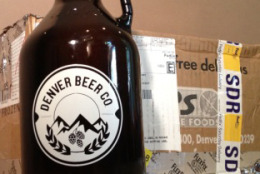 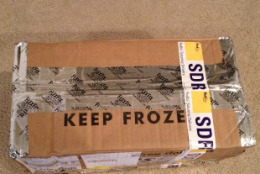 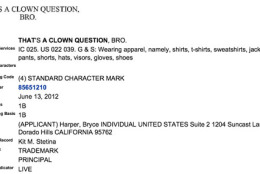 WTOP’s Neal Augenstein obtained a half-gallon growler of Clown Question Bro beer from the brewer. It arrived over the weekend, was chilled in the newsroom refrigerator and was put to a taste test Monday morning. Check out the video below.

WASHINGTON – The co-owner of the Denver brewery set to unveil Clown Question Bro beer Monday – named for Bryce Harper’s response to a Toronto sportswriter – isn’t worried the Washington Nationals phenom has applied to trademark the phrase.

The brewery announced the Canadian lager would be ready to tap in time for the Nats series against the Colorado Rockies, which begins Monday night.

“This beer was brewed specifically for this occasion. I don’t anticipate it will be around for the long run.”

However, buzz about the beer has been intense, since video of Harper’s response went viral.

“I’m sure the interest will last about a week, at least through the Nats series,” says Berger.

Harper, or a representative, applied to the U.S. Patent and Trademark Office to register the phrase “That’s a clown question, Bro” on June 13, the day after Harper refused to answer a question about whether he would be enjoying a beer after a game against the Blue Jays.

Harper is 19 – not of legal drinking age in the U.S., but old enough in Canada – and a Mormon.

According to the filing, the trademark would be for apparel, “namely T-shirts, sweatshirts, jackets, pants, shorts, hats, visors, gloves, shoes.”

It’s unclear whether Harper would challenge the brewery’s use of the phrase.

“If it comes to that, we’d desist,” Berger says.

“He really should be the one making most of the money off this,” says Berger.

Berger said the 16-ounce drink, served in a pilsner glass, will cost $5 at the brewery, which will hold a tasting party Monday.

“We’re in it for fun. This is just having fun with a headline.”

Berger says Clown Question Bro beer will be served on draft, and won’t be available outside the Denver area.

“We’ll only be selling it at the brewery, which is walking distance to the ballpark,” says Berger.

“It’s Coors Field – so you can see why we won’t be selling it at the ballpark,” jokes Berger.