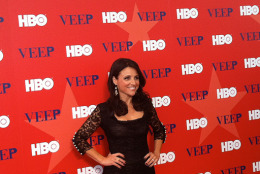 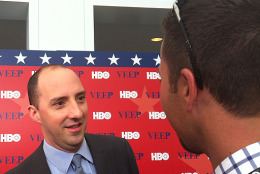 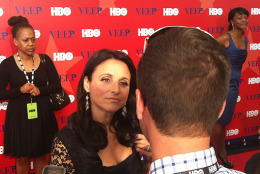 WASHINGTON – The upcoming HBO series “Veep” made its red carpet premiere Wednesday night in D.C., but its star has no intention of making the nation’s capital her permanent political home.

“I will never get involved in politics,” says Julia Louis-Dreyfus, who plays Vice President Selina Meyer in the show. “I really like to entertain, I like to get laughs. And I think if you like to get laughs, maybe politics isn’t your best place.”

The “Veep” premiere screened at the United States Institute of Peace on Constitution Avenue in Northwest. The show is a scripted comedy shot with an improvisational feel, and follows the professional life of the fictional vice president and her staff.

Louis-Dreyfus says vice presidents she spoke to in preparation for her role gave her details on the “nitty-gritty” of the office’s realities.

“The idea is that we’re showing sort of human behavior in the political landscape, and there’s obviously a lot of built-in conflict,” says Louis-Dreyfus, known for playing Elaine Benes on the wildly successful “Seinfeld” in the 1990s.

“Veep” also stars Anna Chlumsky — who rose to fame as Vada Margaret Sultenfuss in “My Girl” — as Meyer’s chief of staff, and features Tony Hale, known for his role as Byron “Buster” Bluth on “Arrested Development.”

Hale says the show is hilariously written, but also tries to provide a bit of insight into political life.

“I think it’s also kind of a realistic look sometimes,” he says. “I think we kind of have to humanize these people a little bit.”

The show begins airing April 22. Check out a trailer below: