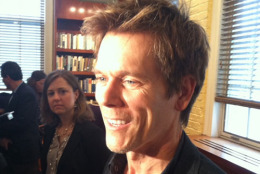 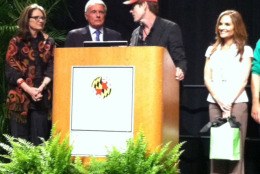 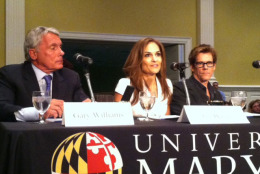 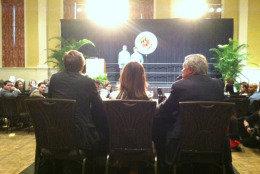 Bacon is known to croon — a talent he adds to his acting creds — but this contest didn’t involve any singing.

Instead, it was the finale of the University of Maryland’s first-ever “Do Good Challenge,” which Bacon launched earlier this year.

The rules were simple: Students had just six weeks to find creative ways to use social media to raise money and awareness for a good cause. More than one hundred teams took part, and six made it to Wednesday’s finals.

Bacon was part of a celebrity judge panel that gathered in the Stamp Student Union to help choose the top three.

Students in the audience could also vote via text message.

The winner of the top prize, $5,000 toward their cause, was the Food Recovery Network.

The organization collects uneaten food on campus and donates it to homeless shelters.

“I think it’s stupid that we have so much food waste,” said Andrew Bresee, a member for the Food Recovery Network team. “Yet one in seven Americans struggle to put food on the table.”

The group is in the process of expanding and has chapters at other colleges and universities, including U.C. Berkley and Pomona College.

Bacon called the concept “a simple and kind of brilliant idea.”

“It goes both ways,” Bacon said of the contest. “By doing this kind of challenge we’re encouraging the idea of doing good and giving back, but we’re also trying to get new ideas from them.”

Philanthropy isn’t a new endeavor for Bacon. A few years ago, he helped found the charitable initiative SixDegrees.org.

“We’re trying to create a new culture of philanthropy,” said Robert T. Grimm Jr., a professor in the School of Public Policy and director of the Center for Philanthropy and Nonprofit Leadership. “And to make the University the destination and the place to illustrate how students can make a difference locally and around the globe.”

“With Kevin Bacon, we were able to do a challenge that got hundreds of students involved making all kinds of impacts from as far as Honduras and Nepal, to homeless shelters right down the street,” said Grimm.

Bauer is a Maryland graduate and, when the competition was over, she declared Bacon an “Honorary Terp.”

She gave him a goodie bag with a Maryland cap inside, which Bacon promptly put on his head.

The University of Maryland has a video of Bacon talking about the event.