Stink bugs are starting to invade the nation\'s capital -- and much of the country -- crawling out of their winter hiding places and getting on the nerves of exasperated homeowners.
Listen now to WTOP News WTOP.com | Alexa | Google Home | WTOP App | 103.5 FM
(1/3) 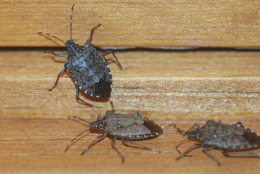 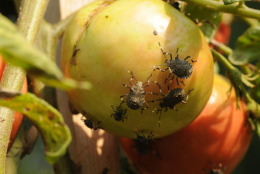 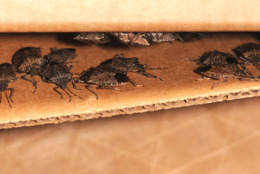 WASHINGTON – Stink bugs are starting to invade the nation’s capital — and much of the country — crawling out of their winter hiding places and getting on the nerves of exasperated homeowners.

The early spring and warm weather are causing all kinds of insects to cover the landscape much earlier than they normally do.

“The exodus has begun,” says Mike Raupp, a professor of etymology at the University of Maryland in College Park.

In the past week, he went from seeing a few stink bugs a month, to seven or eight each day.

“As I see these little rascals up here in my house, I simply annihilate them,” Raupp says, adding that he then freezes them, before recycling the dead stinkbugs as compost.

“These guys are major pests.”

Raupp says he’ll pick up spiders, beetles and other “critters” and let them amble away because they’re largely beneficial to the environment.

“Boy, when I get these stink bugs I treat ’em with extreme prejudice. These guys are simply going to be terminated.”

Stink bugs are turning out to be “one of the most serious agricultural pests we’ve ever seen in the United States,” says Raupp.

In 2010, they caused more than $37 million in damage to fruit growers alone, he says. If they’re not taken care of now, they’ll gobble up all kinds of fruits, vegetables and crops later in the year.

But what’s the best way to exterminate the stink bugs without causing them to stink up the house?

Raupp suggests using a handheld vacuum to suck them up, then emptying the canister of stink bugs into a bucket of soapy water.

“They’re going to stink a little bit but hey, it just comes with the territory — get over it,” Raupp says.

“In my opinion, one less stink bug is one very good thing.”

Raupp did a YouTube video explaining how best to manage stinkbugs.

Stink bugs appear to have originated in Asia, and were first detected near Allentown, Pennsylvania, in the mid-1990s, according to the professor. Since then, they’ve been expanding their range and are now found in at least 33 states across the U.S.

“The thing that’s really got me concerned is this year is shaping up a lot like 2010,” says Raupp, noting that year also was unseasonably warm.

“What I’m really concerned (about) is that we may have another watershed year with stink bugs as we did in 2010.”