Authorities say several people were hurt when a driver fleeing a traffic stop in Prince George\'s County was involved in a crash with a Metrobus at the D.C. border.
Listen now to WTOP News WTOP.com | Alexa | Google Home | WTOP App | 103.5 FM
(1/6) 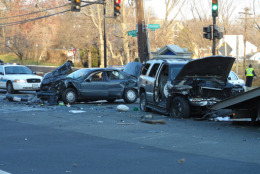 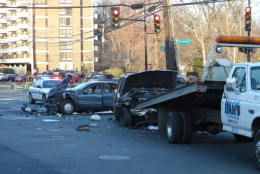 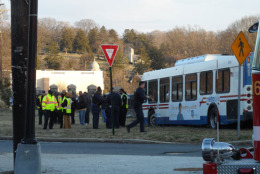 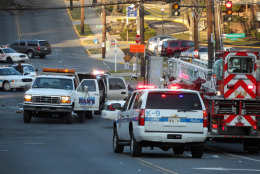 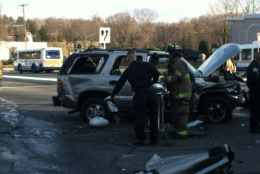 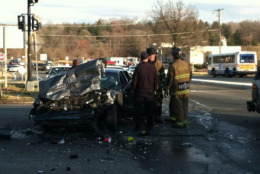 WASHINGTON – Authorities say several people were hurt when a driver fleeing a traffic stop in Prince George’s County was involved in a crash with a Metrobus at the D.C. border.

Prince George’s County police say a crash occurred at about 4:15 p.m. at Pennsylvania and Southern avenues in Southeast. Police spokesperson Cpl. Mike Rodriguez says a car fled toward the District when an officer tried to stop it, and the officer did not pursue it because it was not stolen or involved in a crime. Rodriguez says the crash occurred moments later.

Witnesses had said the crash came after a police chase. One witness tells WTOP Prince George’s police were chasing two vehicles, and at least one of the vehicles went through a red light and hit a Metrobus that was going through an intersection.

“The car hit the side of the bus, and automatically everything came off the car, like the front of the hood, the windows bust(ed) — everything,” the witness says.

Prince George’s County police spokesperson Julie Parker says three people were in the car that fled the traffic stop. The driver is in custody, and Parker says D.C. police have charged him with fleeing and eluding police.

Parker says an officer also was taken to a hospital as a precautionary measure. Rodriguez says the officer was responding to the scene when his car was hit by a driver making a U-turn. The officer has since been released from the hospital.

Pennsylvania Avenue was blocked in both directions between Alabama Avenue and Southern Avenue, but reopened at about 6:30 p.m.