The Occupy D.C. protesters are returning to McPherson Square park, after it was closed late Saturday when tensions escalated between the protesters occupying the park and the U.S. Park Police trying to enforce the no camping rules at the park.
Listen now to WTOP News WTOP.com | Alexa | Google Home | WTOP App | 103.5 FM
(1/20) 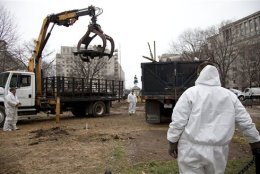 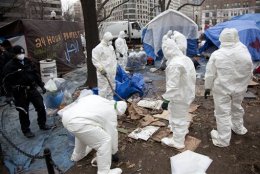 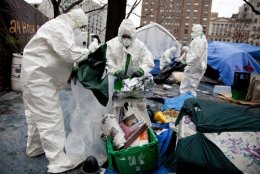 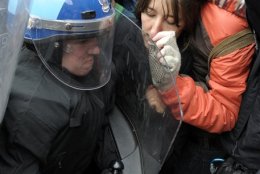 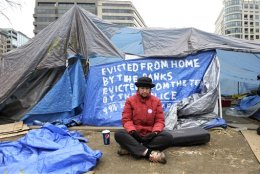 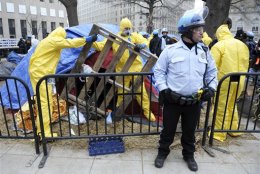 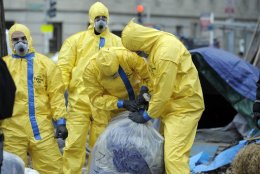 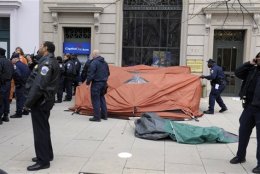 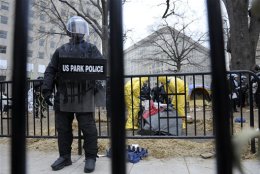 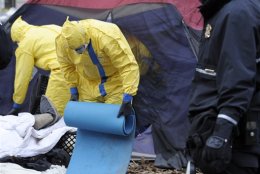 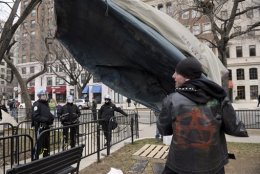 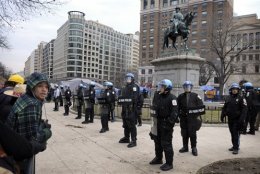 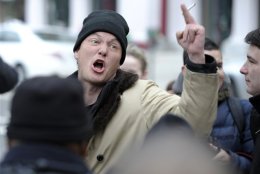 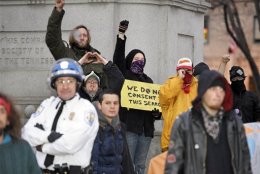 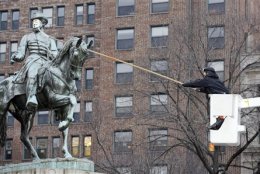 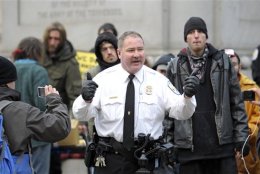 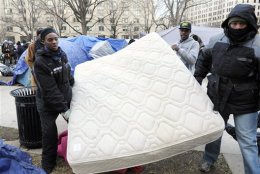 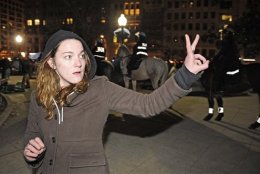 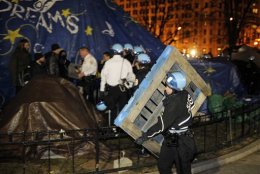 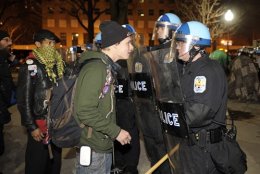 WASHINGTON – The Occupy D.C. protesters are returning to McPherson Square park, after it was closed late Saturday when tensions escalated between the protesters occupying the park and the U.S. Park Police trying to enforce the no camping rules at the park.

McPherson Square reopened Sunday afternoon, after police removed several tents for violating the no camping rules, and for being considered a biohazard. Some of the tents are still standing, but the park looks remarkably different from Friday.

Officials said it was relatively peaceful but got tense late Saturday when an officer was hit in the face with a brick as police pushed protesters out of the last section of the park. The officer was taken to a hospital for treatment.

In total, 11 people were arrested.

One man told WTOP he was allowing some of the protesters into his home “because I feel sorry for them, because it’s raining and it’s going to get cold and windy.”

The officer was taken to a hospital for injuries to his face.

Protesters held a general assembly Saturday evening and vowed to continue the movement. One of the speakers acknowledged the injured officer and urged everyone to practice nonviolence.

“They’re not going to give up just because of something like this,” one man told WTOP.

Police insisted they were not evicting the protesters. Those whose tents conformed to regulations were allowed to stay, and protesters can stay 24 hours a day as long as they don’t camp there with blankets or other bedding. Police threatened to seize tents that broke the rules and arrest the owners.

Officials used barricades to cordon off sections of McPherson Square, a park under federal jurisdiction near the White House, and checked tents for mattresses and sleeping bags and sifted through piles of garbage and other belongings. Some wore yellow biohazard suits to guard against diseases identified at the site in recent weeks. Officials also have raised concerns about a rat infestation.

That move left large swaths of open space and raised questions about exactly what would remain of the encampment once the enforcement was over.

“We found urine soaked bedding materials, bottles of urine, and in some of the tents we found dead rats,” says U.S. Park Police spokesman David Schlosser.

The officers arrived before dawn Saturday at McPherson Square, just blocks from the White House, on horseback and in riot gear.

Police say they want to make sure protesters are complying with National Park Service regulations that allow demonstrations at the site but prohibit camping.

Regulations allow protesters to remain on-site at all hours with tents, they are not allowed to camp out or lay down on things like blankets.

The park service had said it would start enforcing the ban last Monday, and though protesters had braced for a confrontation, it wasn’t until Saturday that police cracked down.

Police said tents that broke the rules would be seized and their owners threatened with arrest.

Some protesters said they considered Saturday’s enforcement a major step toward eviction.

“This is a slow, media-friendly eviction,” said protester Melissa Byrne. “We’re on federal property, so they have to make it look good.”

Jeff Light, a lawyer who represents a couple of Occupy protesters and who was at McPherson Square, said he expected to challenge the police actions in court. He said he was frustrated because a lawyer for the government had said there were no plans to seize tents that complied with the regulations.

“Here they are,” Light said, “doing something different than what they said in court.”

The big blue tarp, called the “Tent of Dreams” by the protests was removed Saturday by the protesters. A Guy Fawkes mask, often worn by Occupy protesters across the country, that was put on the statue was removed by a police officer in cherry picker.

Many protesters began shouting “this is what a police state looks like” as police began to converge on the park early Saturday, though relations between the police and the protesters remained peaceful at that time, and stayed that way until late in the day.

The camp at McPherson Square is among the last remaining Occupy sites, enjoying special First Amendment protections by virtue of its location on park service property.

After months of tolerating the protesters and protecting their right to sleep in the park, the National Park Service announced last week it would enforce a camping ban. It took effect Monday, although police did not take immediate steps to break up or otherwise disrupt the encampment.

Dozens have been camped since Oct. 1 in McPherson Square, just blocks from the White House. Similar to the New York protesters, who strategically occupied a park near Wall Street to highlight their campaign against economic inequalities, the District of Columbia group selected a space along Washington’s K Street, home to some of the nation’s most powerful lobbying firms. Another group of generally older, longtime protesters laid claim to nearby Freedom Plaza five days later for an anti-war rally, then turned their camp into a second Occupy location.

The relationship with police has been generally peaceful, though a daylong standoff in early December over a makeshift wooden building that protesters had erected in McPherson Square in advance of the winter resulted in more than 30 arrests. About five dozen protesters were later arrested during a mass demonstration that shut down K Street.

Democratic Mayor Vincent Gray initially appeared to support the protesters. But any enthusiasm by city officials waned amid reports of violent incidents and, more recently, a rat infestation that alarmed the health department.

The encampment caught the attention of Rep. Darrell Issa, a California Republican who chairs the congressional committee that oversees district affairs. Issa questioned whether the protesters were permitted to remain for political reasons, which park service officials denied. At a congressional subcommittee hearing last week, director Jonathan Jarvis said the park service would enforce the camping ban soon, but that officials would encourage protesters to sleep elsewhere rather than evict them en masse.

The park service contends protesters are allowed to maintain a 24-hour vigil in the park. Jarvis cited other examples of long-running vigils on park service property in the nation’s capital, including a 1979 sit-in by farmers with tractors on the National Mall and an ongoing, 30-year vigil by one person against nuclear proliferation in Lafayette Square across from the White House.