Holidays: 'Enchant' shines with millions of lights in Nats Park | Where to see holiday lights | Send in photos of decorations | How to give greener this season
Home » Latest News » D.C. jazz clubs improvise…

As the traditional audience for jazz ages and moves out of D.C., the District\'s jazz clubs are thinking creatively to attract a growing younger population that seems to prefer other forms of entertainment.
Listen now to WTOP News WTOP.com | Alexa | Google Home | WTOP App | 103.5 FM
(1/2) 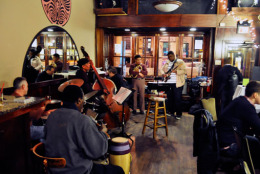 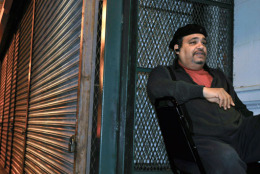 WASHINGTON — To survive, Washington, D.C.’s historic jazz clubs are being forced to improvise.

As the traditional audience for jazz ages and moves out of the city, the District’s jazz clubs are thinking creatively to attract a growing younger population that seems to prefer other forms of entertainment.

“The music scene in D.C. is really good, the problem is getting the young people involved in jazz, as opposed to the new music that’s out there these days,” said Steve Furtado, a manager at Columbia Station in Adams Morgan.

Columbia Station is one of several jazz clubs that has seen hard times. Situated between techno clubs and noisy bars, the small venue seems out of place in a very youth-oriented neighborhood.

“Jazz has life here, there’s plenty of young people in this area, but it’s just a matter of exposing it, and making sure it still lives on,” Furtado said.

Furtado said the young people that do patronize the club often stop in on their way to other bars and clubs.

“They usually are stopping at two or three spots on this street, and if they spend a little time here, I say they’re getting some exposure to the music,” Furtado said. “And we have the few hardcore older jazz enthusiasts who are more reliable customers.”

Columbia Station remains one of the only jazz clubs in the city without a cover charge or a minimum, which Furtado says helps bring in a younger audience. The club is developing a new marketing strategy targeting the next generation, one that relies heavily on social media. The club now has a twitter account and is looking to expand their presence on Facebook.

Another club that has been a staple of the district’s jazz scene is HR-57. The club was named after a 1987 Congressional resolution which designated jazz as an “indigenous American music and art form” which “makes evident to the world an outstanding artistic model of individual expression and democratic cooperation within the creative process, thus fulfilling the highest ideals and aspirations of our republic.”

The club has continually relocated since it opened in 1993 at 9th and P streets Northwest, moving four times to escape rising rents. They moved to the burgeoning H Street neighborhood in Northeast in 2011, and are planning to move to a larger location on H Street in the near future.

“It seems that every neighborhood we’ve moved into, the rents have skyrocketed,” Puesan said.

He said he and his wife Denise founded the club to preserve America’s music.

“We thought it was important to set something up to preserve this music. We first talked about setting up a museum, and then we realized that museums keep items under glass, and that by keeping something under glass, the people don’t get a chance to touch and feel and experience it,” Puesan said.

One policy that sets HR-57 apart from the other jazz clubs in the city is their bring-your-own-alcohol policy. Puesan said the policy is very popular with customers, especially younger patrons who like not having to pay bar prices. The policy allows the club to focus on the music.

“The customers really like the BYOB policy. The reason we do it is because we never started off to become a venue where you come to get drunk. We push music, not liquor,” Puesan said.

An added benefit of this policy, he said, is it creates a more peaceful atmosphere.

Bohemian Caverns, located on U St. Northwest, has been a mainstay of the district jazz scene for 86 years. When current owner and manager Omrao Brown took over in 2005, he increased the performance slate to include spoken word artists and other local acts to attract a broader audience. In 2010, the club formed its own in-house big band.

The club is also in the process of becoming a non-profit organization, which will allow them to apply for grants and reduce their tax bill.

The owners of the various clubs all agree that they need to work to make jazz clubs more popular with a wider demographic. But in their efforts to attract a younger audience, they must also avoid turning off their generally older core audience.

Puesan says the music is an American classic, and can be appreciated by everyone.