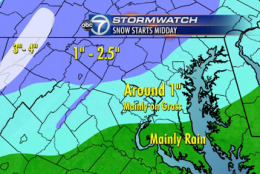 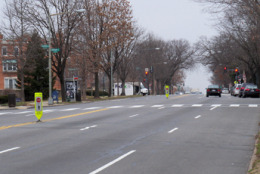 WASHINGTON – Federal employees can take unscheduled leave or telework from home on Wednesday in anticipation of what many forecasts believe could be a non-event.

The Office of Personnel Management made the announcement by email just after 10 a.m. Wednesday, at the same time as the National Weather Service’s winter weather advisory began to take affect for many area counties.

Flakes have fallen and waned in the Gaithersburg and Frederick areas, and it’s snowing everywhere to the west of the Blue Ridge Mountains, reports ABC7 Meteorologist Alex Liggitt. But warmer conditions around D.C. have limited snowfall there.

“We’re really looking at a majority just light rain in the immediate D.C. area,” Liggitt says. “We’re really not expecting that much in the way of accumulations on the roads at all.”

Temperatures have remained in the mid 40s. “That’s a great thing as far as the commute goes,” says Liggitt.

An expected 3 inches of accumulation in some parts of the region was expected to start mid-day and could still affect the evening commute. The D.C. area could get up to an inch in grassy areas.

In anticipation of an early evening commute, the D.C. government switched traffic signals to rush-hour timing at 1 p.m. to “facilitate the movement of traffic as employees leave work earlier to reach their destination before conditions can hamper travel,” according to a D.C. Department of Transportation release.

More than 180 snow plows were on their routes at 11 a.m. Wednesday, applying salt to major roadways and residential streets, DDOT says. They will work through the night into the Thursday morning rush hour.

Ahead of the snow, Fauquier County Public Schools closed for the day. WTOP’s Closings and Delays page will be continually updated through the day.

A winter weather advisory is in effect until 8 p.m. for the following counties:

A winter weather advisory means snow could make travel difficult. Drivers should use caution on the roads.

If you are seeing snow in your neighborhood send us a photo at webmail@wtop.com.