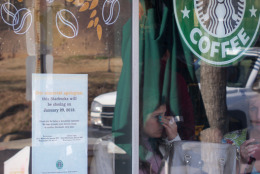 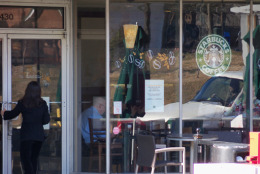 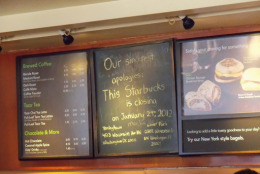 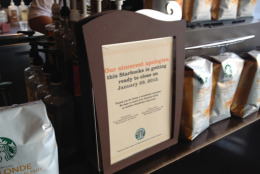 WASHINGTON — The first Starbucks store on the East Coast, which opened in 1993 on Wisconsin Avenue near the National Cathedral, will serve its last drink Sunday.

The Friendship Center Starbucks is located in the first floor of a non-descript strip shopping center.

It’s been known to draw a number of well-known people in for coffee, including former first daughter Chelsea Clinton who was spotted there with classmates when she attended nearby Sidwell Friends School.

Signs posted on the store windows and inside the store offer “sincerest apologies” and thanks to “wonderful customers” who will soon have to find a new place to drink coffee and congregate.

Starbucks says it will reopen upon completion of the new Cathedral Commons Center, which will be anchored by a new Giant supermarket.

In a statement, Starbucks says it will “look forward to continuing to serve the Washington, D.C./Friendship Heights community that we’re proud to have been a part of for nearly two decades.”

Full disclosure: The java shop across the street from WTOP is a favorite among staffers. In anticipation of its closing, WTOP’s newsroom has a new coffee dispensing machine, capable of making designer coffee shop staples, including espresso.