Holidays: 'Enchant' shines with millions of lights in Nats Park | Where to see holiday lights | Send in photos of decorations | How to give greener this season
Home » College Football » Purdue seeking to beat…

Purdue seeking to beat Wisconsin for first time since 2003

Line: Wisconsin by 2 1/2, according to FanDuel Sportsbook.

Purdue is chasing its first five-game winning streak since 2007 and would be alone in first place in the Big Ten West for at least a week. Co-leader Illinois has an open date. Wisconsin is attempting to beat Purdue for a 16th consecutive time. The Boilermakers haven’t beaten the Badgers since a 26-23 victory in 2003 at Madison.

Wisconsin RB Braelon Allen vs. Purdue run defense. Allen matched a career high with 29 carries and rushed for 123 yards against Michigan State last week but also had a costly fumble in the second overtime as the Badgers fell 34-28. Allen ran for 140 yards and two touchdowns on just 12 carries in a 30-13 victory at Purdue last season. Purdue is ranked fifth in the Big Ten in run defense but has lost 15 straight in this series in part because of its inability to slow down Wisconsin’s ground attack.

Purdue: RB Devin Mockobee. The redshirt freshman has given Purdue a different dimension since replacing the injured King Doerue four weeks ago. He’s logged 54 carries for 316 yards and three scores over the past three weeks with 100-yard games against Minnesota and Nebraska. Wisconsin may pose a tougher challenge for the impressive walk-on.

Wisconsin: OLB Nick Herbig. His six sacks are the most of any Big Ten player. He has a total of 15 sacks since the start of the 2021 season. Herbig recorded 2 1/2 tackles for loss against Michigan State.

The Boilermakers are trying to become bowl eligible at their earliest date in 15 years. … Purdue has won both conference road games this season and is 8-3 outside of West Lafayette over the past two seasons. … Wisconsin has intercepted 11 passes. The only Football Bowl Subdivision defenses with more interceptions are No. 12 Southern California and Illinois, with 12 each. …Mockobee’s 178 yards rushing last week broke Purdue’s single-game freshman record. … This is Wisconsin’s homecoming game. Wisconsin has won its last eight homecoming games by an average margin of 31 points. … Purdue’s leaders in passing (Aidan O’Connell), receiving (Charlie Jones) and rushing (Mockobee) all began their Big Ten careers as walk-ons. … Wisconsin has scored touchdowns on 19 of its 24 red-zone possessions. That 79.2% touchdown conversion rate in the red zone ranks ninth in the FBS. 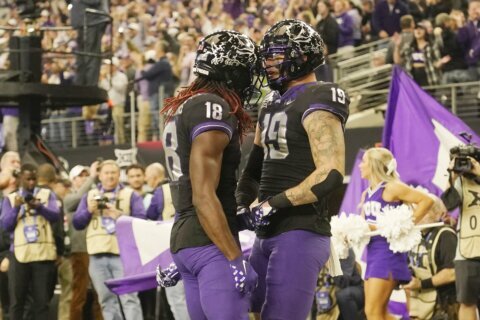