Smith had scoring tosses on his first two passes after replacing Tyler Shough in the first half. McGuire indicated he planned to play both, but said at halftime Shough was injured and probably wouldn’t return.

Shough, whose 2021 season ended after four games with a broken left collarbone, was on the sideline in the second half with a sling on that same non-throwing shoulder. McGuire said the team would know more about the injury Sunday.

“I hate it for the kid,” McGuire said. “I told him whatever it is, the good thing is it’s September the third and not October.”

Smith replaced Shough late on a drive that included the starter’s 17-yard run for a first down, and Smith’s first pass was a 30-yard score to Jerand Bradley.

“We always preach stay ready so you don’t got to get ready,” said Smith, who was 14-of-16 passing for 221 yards without an interception. “Every time we’re in the film room, every time we’re practicing, we always take reps in the back.”

Brooks finished with 50 yards and scoring runs of 14, 3 and 23 yards, the last giving the Red Raiders a 42-10 lead late in the first half on the way to their 23rd consecutive victory in a home opener.

Texas Tech’s first meeting with Murray State and 20th consecutive victory over an FCS opponent was similar to the lower-division matchups from 2010-19, when the average margin of victory was 40 points.

The Red Raiders, who scored TDs on their first eight possessions, were coming off consecutive years of closer-than-expected FCS openers under former coach Matt Wells — victories over Houston Baptist and Stephen F. Austin — before Wells was fired midseason last year.

McGuire, a lifelong Texan who was a Baylor assistant the past five years after winning three Texas high school state championships, didn’t have to worry for long about becoming the fifth consecutive Texas Tech coach since 2000 to win his opener.

Murray State quarterback DJ Williams, the Ohio Valley Conference freshman of the year last season, sustained an apparent right leg injury on the final play of the first half.

Williams was scrambling before setting up to throw with the Racers trying to get a touchdown as time ran out before the break, and his right leg buckled as he lost control of the ball and crumpled to the turf. Williams was helped off the field, unable to put any pressure on his right leg.

Bradley and Loic Fouonji had two touchdown catches apiece. Fouonji opened the scoring on a 30-yard catch from Shough before Smith’s first TD toss to Bradley.

Bradley, a sophomore, had his first career 100-yard game with 108 yards on six catches, and Fouonji finished with four catches for 77 yards.

Smith led two quick scoring drives to start the third quarter before getting replaced by Behren Morton, who threw a 21-yard pass to Mason Tharp to finish the scoring early in the fourth. Shough was 6 of 10 for 154 yards as Texas Tech finished with 472 yards passing and 605 total.

Murray State: The Racers’ hopes going forward will depend a lot on the health of the dual-threat Williams. Before the injury, he had 207 yards passing with a 54-yard touchdown to Jacob Bell. Murray State gained just 35 yards without Williams in the second half. Lucas Maue was 1-of-7 passing for 1 yard.

Texas Tech: Shough was the starter for the second consecutive opener, but Smith was probably going to play regardless. The sophomore got into nine games last year in part because of Shough’s injury, and looks prepared to be the full-time starter if Shough is facing another lengthy absence.

If the opener is any indication, Brooks and SaRodorick Thompson will share the carries at running back much like they did late last season. Brooks had six carries to seven for Thompson, whose 48 yards pushed him past 2,000 for his career. Thompson caught a 30-yard TD from Smith.

Murray State: The Racers’ home opener is next Saturday against Jacksonville State.

Texas Tech: No. 24 Houston visits the Red Raiders next Saturday with the Cougars coming off a 37-35 victory at UTSA in triple overtime. 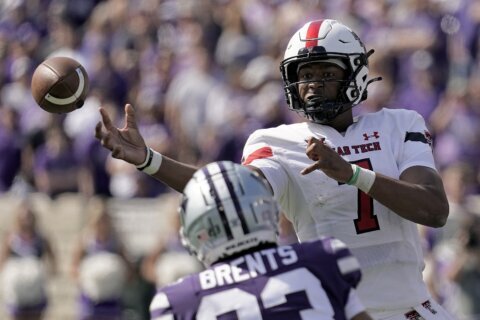