As Maryland, Navy, Virginia and Virginia Tech were getting their seasons underway, week one gave us quite a buffet from noon to midnight Saturday.
Listen now to WTOP News WTOP.com | Alexa | Google Home | WTOP App | 103.5 FM

College football certainly doesn’t disappoint. I think it’s a byproduct of the volume of games that allows for some outstanding ones.

As Maryland, Navy, Virginia and Virginia Tech were getting their seasons underway, week one gave us quite a buffet from noon to midnight Saturday. Everything from a 7-3 Iowa win over South Dakota State where two safeties were the margin of victory, to a 63-61 North Carolina triumph at Appalachian State. Word is that Jordan hit a jumper with 17 seconds left before Worthy made a game-clinching steal.

We saw a missed extra point and missed field goal torpedo the bid of No. 13 NC State, while defending national champion Georgia looks just as good as they did last fall.

But the biggest development over the weekend was the College Football Playoff Committee’s vote to expand the field from four to 12 schools by 2026.

Now, the cynic in me tweeted a “quote from the committee” on the topic:

While this is a blatant cash grab (because the natural expansion would be from four to eight and have all Power Five Champions in as automatic qualifiers), I am behind this move and think this will benefit the game long-term.

One, the “top six conference champions” means we place value on winning one’s league. If you are good enough to play for a Big 12, Pac 12, Big Ten, ACC, or SEC and win the game, you have earned your way onto the path for a national championship.

Two, this allows at least one “Group of Five” school a place in the party.

Third, the first round will be held on campus sites. Tell me that’s not going to give the sport just a little juice during its “dead period” where the semifinals are weeks away and we’re being fed a diet of forgettable bowls between 6-6 schools.

Will we see an unbeaten AAC champ, or a three-loss Wisconsin win it all? Not likely. But this is a “national championship” playoff, not just the SEC Invitational.

And you know what? I’m sure some years the SEC will get a third, maybe even a fourth team in. And they’ll get to show what they’ve got on the field. Isn’t that a novel concept?

Virginia Tech (0-1) got the weekend going by getting tripped up at Old Dominion 20-17. First half mistakes (an interception and a lost field goal snap) gave the Monarchs a three-point lead at intermission. And then the elevator got stuck.

Yes, the second half was delayed at S.B. Ballard Stadium due to the Hokies assistant coaches’ elevator getting stuck. Will that be a metaphor for Coach Brent Pry’s first season at the helm?

Hokie Highlights: Keyshawn King ran for 111 yards and caught a touchdown pass, while Nick Gallo made seven receptions on the evening. Dax Hollifield led the defense that held ODU to 3-16 on third down by notching 11 tackles.

Hokie Humblings: Grant Wells threw four interceptions, the first of which set up the Monarch’s first touchdown. The “break-but-not-bend” defense coughed up a 38-yard pass to the VT one with 1:09 left in regulation.

The bad snap on the field goal that was scooped and scored was a pivotal play. Fourteen penalties for 100 yards hurt as well … you cannot do that on the road and expect to win. Even at a Sun Belt school.

Maryland (1-0) began each half with a bang in its 31-10 win over Buffalo. The Terps got a 33-yard touchdown run from Roman Hemby on their first possession of the day and Hemby delivered a 70-yard scamper for a score on the second play of the third quarter.

Terrapin Triumphs: Hemby rushed for 114 yards while Antwain Littleton also had a pair of touchdown runs. Rakim Jarrett caught six passes for 110 yards while Dontay Demus, in his first game since last Oct. 1, made three catches.

Henry Chibueze tallied two sacks as the D-Line got great push all afternoon. Jakorian Bennett broke up five passes as the defense held the Bulls to 5-16 on third down and began the second half by allowing nine yards on 14 plays as the Terps expanded the lead from 10 to 24.

Tarheeb Still made a difference in the return game with his 18-yarder in the second quarter that put the Terps on the Buffalo 31 (they’d score three plays later).

Terrapin Troubles: The offense moved the chains on 4-13 third downs, and they didn’t help themselves by being held to no gain or minus yardage on first down multiple times. Six first half penalties undercut their best efforts.

Navy (0-1) was favored at home for the first time since 2019. After their 14-7 loss to FCS Delaware, it might be some time before they’re favored again.

The day began disastrously with a fumble on the first play from scrimmage, and the next four possessions saw a 3 & out, a missed field goal and two more lost fumbles. The fact that they only lost by seven is a credit to the defense, but the offense needs to get its stuff together or this season will feel late rather early.

Midshipmen Medals: John Marshall spearheaded the defense with seven tackles and two sacks. That unit held the Blue Hens to 2-13 on third down. Riley Riethman averaged 46.2 yards per punt.

Midshipmen Miscues: Three fumbles lost in the first half blew up any chance for the offense to establish rhythm, and the running game would average just 2.9 yards per carry for the afternoon.

Virginia (1-0) took suspense out of the equation early against Richmond, scoring touchdowns on four of their first five drives to take a 28-10 lead into halftime.

The 34-17 victory in Coach Tony Elliott’s first game comes six years after losing by 17 at home to the Spiders during Bronco Mendenhall’s debut. The Cavalier faithful were likely in full celebration mode by kickoff after their in-state ACC counterparts lost the night before.

Cavalier Congrats: Brennan Armstrong picked up where he left off in 2021, throwing for 246 yards, while running for 105 yards and a touchdown.

Cavalier Concerns: Turnovers on consecutive drives gave the Spiders a little life, with a lost fumble leading to a touchdown and an interception turning into a missed field goal. A missed extra point wasn’t as costly in Charlottesville as it was in Greenville. 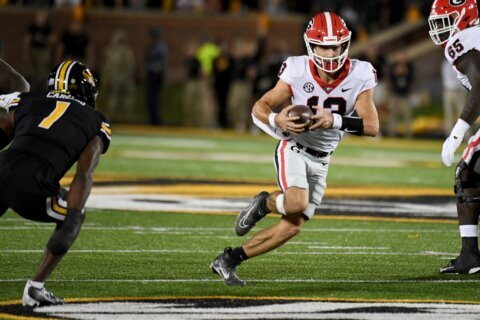 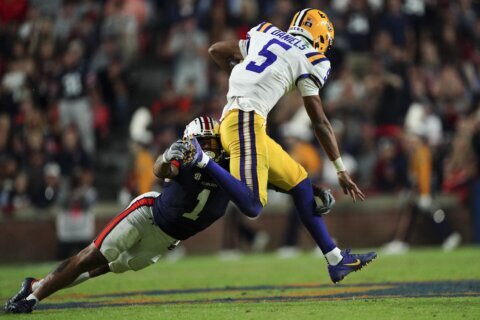