LAWRENCE, Kan. (AP) — The strides made by Kansas under first-year coach Lance Leipold were evident on an autumn night in Texas, when the long-suffering Jayhawks stunned the Longhorns in overtime in one of the biggest upsets in college football.

They took TCU and West Virginia down to the wire in their final two games, too, giving the Jayhawks — despite winning just two games all season — the rare feeling of positive momentum heading into this season.

“Year 1 was definitely a whirlwind,” admitted Leipold, the longtime small-college coach who turned around Buffalo before taking leadership of the Jayhawks. “But we feel the foundation has been set in many ways. Feel pleased on how we finished last season, the way we progressed her in the spring and some of the additions to our roster.”

Simply having a normal spring was a good start for Leipold, who was hired midway through camp when Kansas and then-coach Les Miles parted ways. The program was coming off a winless season, low on scholarship numbers and the subject of such overwhelming fan apathy that ever filling Memorial Stadium again seemed farfetched.

The progress during the early part of last season was hard to see: a 49-22 drubbing by Coastal Carolina, a 59-7 loss to Iowa State and a 55-3 blowout by Oklahoma State. But once the Jayhawks settled on Jalon Daniels under center, and the defense began to learn coordinator Brian Borland’s system, things began to slowly turn around.

It all culminated in Austin, when the Jayhawks finally gave their fans a reason to feel proud again.

“The players understood our routine, our message was going to be consistent and we weren’t going to waver from it. And when they saw that and started to get better in what we were doing and understanding, it started to show itself late in the year,” Leipold said. “That win, obviously, and the injection of Jalon at quarterback really helped us the last few games.”

The trick is to continue on that promising path.

It helps that Daniels is back under center. The Jayhawks opened up the quarterback competition again this fall, but it was clear early on that junior would not be beaten out. He threw for seven touchdowns and ran for three more while throwing just three interceptions in the final three-plus games that he started last season.

“Jalon’s game has elevated to a different level,” Jayhawks wide receiver Lawrence Arnold said. “I feel like last year was just a glimpse for everybody to see, but this year is going to be a whole different Jalon.”

Arnold will be joined by veteran wide receivers Luke Grimm and Steven McBride in the lineup. But the biggest help for Daniels will be Devin Neal lining up behind him. He ran for 707 yards and eight scores as a freshman last season.

“It was a blessing last year,” Neal said, “but I’m not too focused dwelling on the past. I’m focused on getting better each and every day. We want to achieve big things this year and it starts now.”

The Jayhawks could have one of the best groups of running backs in the Big 12 season. That’s because Neal will be backed up by Ky Thomas, who ran for more than 800 yards last season at Minnesota, and Sevion Morrison, who showed plenty of promise while getting relatively few opportunities last season at Nebraska.

OH, BUT THE DEFENSE

The Jayhawks allowed 42.17 points per game last season, behind only UMass at the bottom of Division I football. The Jayhawks also topped Arkansas State to keep from being last in rush defense, were 81st in pass defense and tied for 50th in turnover margin.

The Jayhawks could have as many as seven transfers start on defense. They include pass rusher Lonnie Phelps (Miami-Ohio), Craig Young (Ohio State) and Lorenzo McCaskill (Louisiana) at linebacker, Kalon Gervin (Michigan State) and Monte’ McGary (Utah State) at cornerback and Marvin Grant (Purdue) and Jarrett Paul (Eastern Michigan) at safety.

While a bevy of transfers will help the defensive backfield, its success will largely depend on Kenny Logan Jr., an All-Big 12 safety who has NFL potential. Logan led all Power Five safeties with 113 tackles last season.

The Jayhawks open Sept. 2 against Tennessee Tech before diving straight into Big 12 play with a trip to West Virginia, which barely beat Kansas last season. Then comes a tough trip to future conference foe Houston. A back-loaded schedule means Kansas finishes with a brutal five game stretch at Baylor, against Oklahoma State, at Texas Tech, against revenge-minded Texas and at Kansas State. 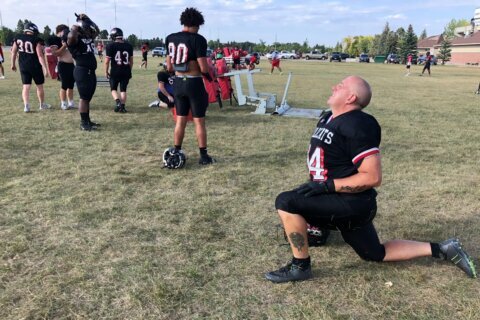 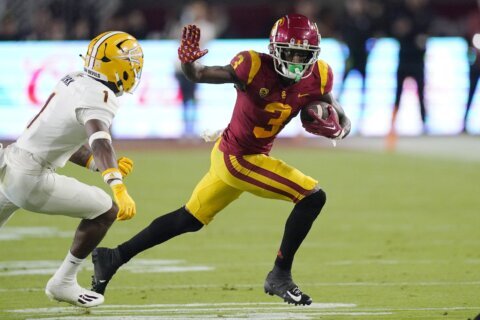 Surprising Cougars out to end No. 6 Trojans’ unbeaten start 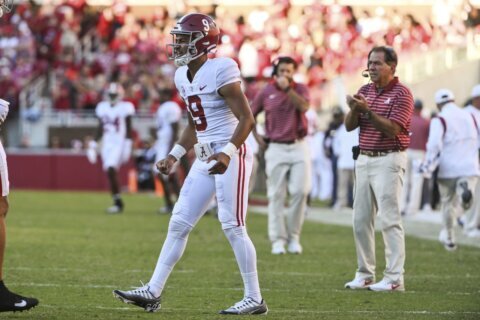