The local college football season wrapped up on a chilly Wednesday in the Bronx.

And as the afternoon shadows grew at Yankee Stadium, it began to get unforgivably chilly for Virginia Tech in the 54-10 New Era Pinstripe Bowl loss to Maryland.

Even with a pair of big-play scores in the first half, it appeared as though we’d enter halftime with the Terps leading 21-10. However, with the Hokies having the momentum after a clock-purging 13-play, 75-yard march over 5:11, head coach Mike Locksley and quarterback Taulia Tagovailoa had too little time (1:02 left) remaining to come up with an answer (they had tallied 154 total yards to that point).

But there was just enough on the clock for Tagovailoa to complete five straight passes that set up Joseph Petrino’s 44-yard field goal.

Momentum was Maryland’s and they didn’t give it back, outgaining Virginia Tech 187-8 in the third quarter and scoring on each of their three possessions in that period, which saw the sun set on the Hokies season (while it didn’t “get late early” as the late Yogi Berra would say, it went from dusk to pitch-black rather quickly).

Maryland (7-6) posted its first winning season since 2014 by posting its first bowl victory since 2010 in the Terps’ first bowl game since 2016. The rout of Virginia Tech put an exclamation point on year three under Locksley, and the Terrapin graph is currently going upwards (.250 winning percentage to .400 to .538). And even though Locksley celebrated the 25 seniors who depart the program, the future looks bright with many of the playmakers from Wednesday’s game at Yankee Stadium coming back for 2022.

Terrapin Triumphs: Tagovailoa completed 20 of 24 passes for 265 yards and two touchdowns while rushing for 42 yards and allowing no sacks. Both of his TD tosses were corralled by senior Darryl Jones (four catches for 111 yards on the day). Armed with a double-digit lead, the ground game salted this one with 184 yards rushing in the second half. Ruben Hyppolite II tallied 12 tackles as the defense forced four three and outs (a fifth drive was a turnover after four downs and a sixth saw a fumble on second down) Nick Cross forced a fumble that was returned by Greg Rose for the game’s final defensive score while Tarheeb Still returned a punt 92 yards for the first score of the day.

Terrapin Troubles: Maryland’s offense went 3 of 7 on third down, going 0-2 in the first half. The defense didn’t break as much as it bent in the first half as the Hokies had the ball for over 23 minutes in the first two periods. Special teams allowed a successful fake punt that jumpstarted Virginia Tech’s first scoring drive.

Virginia Tech (6-7) ended what was a roller-coaster season that saw an opening night upset of No. 10 North Carolina and three points scored in a loss to Boston College, who was on a four-game losing streak. Even though he has been gone since mid-November, the school also closed the books on the Justin Fuente era that started with smooth sailing (the 2016 Coastal Division crown and a 19-8 mark over two years) before running aground (three sub-.500 finishes in the last four years). Brent Pry will have even more carte blanche to install his vision in Blacksburg this spring.

Hokie Highlights: After throwing only 16 passes all fall, Connor Blumrick threw for 110 yards and ran for the team’s lone touchdown. VT ran 43 plays to 19 for MD in the first half, controlling the clock (see above). The defense stymied the Terps early, holding them to 24 yards on their first eight plays from scrimmage. Special teams kept a drive alive with a successful fake punt.

Hokie Humbling: The offense converted just four of 14 third downs with before Blumrick was benched in the second half, while the defense allowed a 93% completion rate in the first half and 7.7 yards per carry in the second half. Big plays buried Virginia Tech in all phases, allowing a 92-yard punt return for a touchdown, a 70-yard touchdown pass, and an 11-yard sack-fumble that was returned for a score.

Next: Saturday, Sept. 3, 2022, against Old Dominion (Monarchs fans recall these schools have met before). 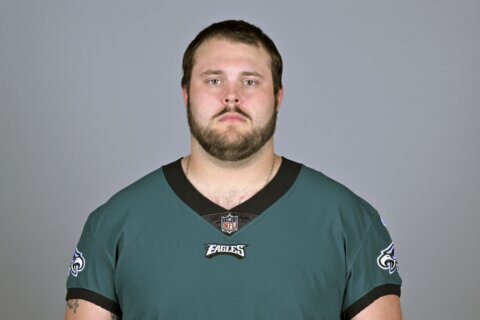 Eagles reserve lineman accused of rape ahead of Super Bowl