Towson grinds out win over Albany 38-24

TOWSON, Md. (AP) — Mark Collins returned an interception 80 yards for a touchdown to highlight a 21-point second quarter and Towson went on to defeat Albany 38-24 on Saturday.

Dave Matthews sandwiched a pair of short touchdowns runs around the pick-6, tied for the fourth-longest in school history, as the Tigers (4-4, 3-2 Colonial Athletic Association) took a 24-0 lead at the half.

Jerry Howard, who had 145 yards on 19 carries, and D’Ago Hunter also had rushing touchdowns as Towson piled up 237 yards on the ground.

Albany (0-8, 0-6) had 432 yards but the Great Danes had two turnovers and failed on fourth down twice, including a critical first-half possession in the red zone.

Jeff Undercuffler was 28 of 41 for 341 yards and two touchdowns for Albany. Jackson Parker had 13 catches for 114 yards and Roy Alexander eight for 166, with both hauling in a scoring pass. The catches and yards were career-bests for the freshmen receivers. 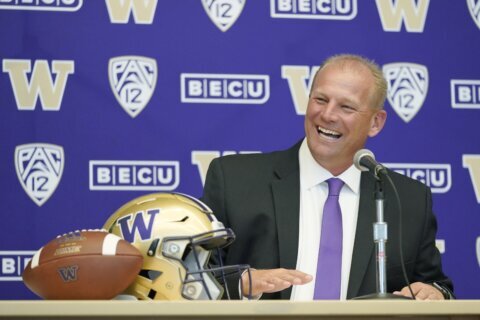 LSU, Kelly agree to 10-year contract worth at least $95M