No. 17 Pitt tries to keep momentum going against Hurricanes

PITTSBURGH (AP) — Coach Pat Narduzzi isn’t comfortable. Not even with No. 17 Pittsburgh off to its best start since…
Listen now to WTOP News WTOP.com | Alexa | Google Home | WTOP App | 103.5 FM

PITTSBURGH (AP) — Coach Pat Narduzzi isn’t comfortable. Not even with No. 17 Pittsburgh off to its best start since Narduzzi’s first year on the job in 2015.

Maybe he’s forgotten what happened during the end of that first season. Or maybe he’s blocked it out because he doesn’t have the bandwidth.

The Panthers (6-1, 3-0 Atlantic Coast Conference) are riding a four-game winning streak into Saturday’s visit by injury-ravaged Miami (3-4, 1-2) and have stamped themselves as the clear Coastal Division favorite after beating Clemson last Saturday.

Though Narduzzi institutes a “24-hour rule” after each game that gives his players and staff a window to either celebrate a win or grapple with a loss, his window is much narrower. Even after a decisive victory over ACC royalty.

“I will go home (after games and) my kids are, ‘Dad, why are you not happy?’” Narduzzi said. “Because I know what’s on the horizon, what’s coming into Heinz Field Saturday at noon.”

Namely, a team that may have started to figure things out in a thrilling upset over North Carolina State last week. After saying he didn’t think the Wolfpack could stop him or the rest of the Hurricane offense, Miami redshirt freshman quarterback Tyler Van Dyke threw four touchdown passes, the last a 4-yard strike to Charleston Rambo with less than 10 minutes to play that gave the Hurricanes the lead for good.

Van Dyke admitted he was surprised when N.C. State players started jawing at him during warm-ups. Then again, he’s not complaining either. Not after it galvanized the Hurricanes.

“I think it inspired the whole team,” he said. “It inspired me too. It gave us a bunch of confidence really.”

“(He) was like, ’try not to say anything (controversial) to the media,” Van Dyke said with a laugh.

No chance. Van Dyke and the Hurricanes are far too wary of the Panthers and quarterback Kenny Pickett. Pitt has won each of its three ACC games by double digits, including a decisive 27-17 victory over Clemson in which Pickett passed for 302 yards and two scores and also ran for a pair of late first downs that let the Panthers drain the clock and stoke the kind of optimism that hasn’t been seen around the program for more than a decade.

The success has brought a lot of attention but Pitt — which has won 10 games in a season just once since 1981 — isn’t getting ahead of itself.

“It’s great and all to have that recognition of being a Top 20 team,” said left guard Marcus Minor, a graduate transfer from Maryland. “But it won’t matter if we can’t produce on Saturdays.”

The Hurricanes are hurting in the defensive backfield. Redshirt junior safety Bubba Bolden is out for the rest of the season after having surgery to repair a shoulder he initially hurt against Virginia on Sept. 30.

Bolden, the team’s leading tackler, leaves behind a young secondary that now has to find a way to deal with the nation’s fourth-highest scoring offense and a Heisman Trophy contender in Pickett.

“When Bubba’s on the field, he’s the leader of the group,” freshman safety Kam Kinchens said. “He’s more experienced than us because he can help us through everything. … We freshmen, we’ve got to step up and be vocal.”

GONE BUT NOT FORGOTTEN

Pitt’s defense has learned from the comedy of errors that piled up during its’ only loss of the season, a 44-41 stunner at home to Western Michigan last month when Pitt gave up 517 yards.

“We don’t forget that (Western Michigan) game,” said Pitt defensive coordinator Randy Bates, whose unit has allowed 13 points per game during its current winning streak. “We want to move by it but we haven’t forgotten it. You’ve got to learn from your mistakes because if you do it again, it’s pretty silly. And I believe that’s what we’re doing.”

Any realistic chance Miami has to stay in the Coastal race hinges on the Hurricanes winning Saturday. A loss would mean they’re three games behind Pitt with four games remaining and the Panthers would hold the head-to-head tiebreaker.

Pickett and Van Dyke are two of the three quarterbacks to have at least 325 yards, four touchdowns and no interceptions in an ACC game this season. Virginia’s Brennan Armstrong is the other. Pickett has put up those numbers twice this season when counting a non-conference game against New Hampshire. Wake Forest’s Sam Hartman also hit all those marks last weekend in a non-conference win over Army.

The Panthers could be without two of their top weapons. Sophomore wide receiver Jordan Addison and leading rusher Israel Abanikanda are both questionable after going into the concussion protocol against Clemson.

Abanikanda’s absence could provide more playing time for 5-foot-9, 175-pound freshman Rodney Hammond, who ran for 66 yards against the Tigers.

“You can put in that little No. 9 (Hammond), that guy’s the size of a Mountain Dew can, let him run the ball,” tight ends coach Tim Salem said. “He’s not very big but watch him play.” 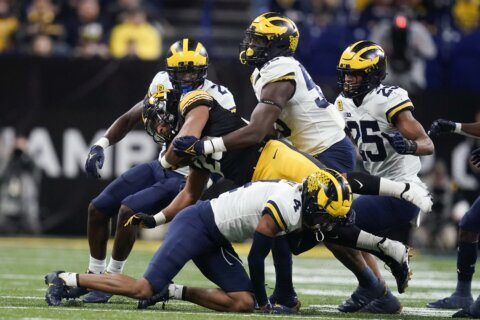 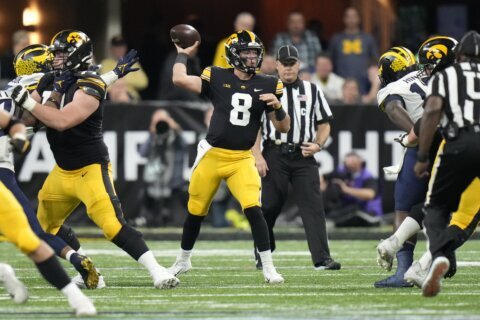