Virginia found itself down against Louisville as Saturday afternoon turned to Saturday evening, but quarterback Brennan Armstrong was not out.
Listen now to WTOP News WTOP.com | Alexa | Google Home | WTOP App | 103.5 FM
(1/10) 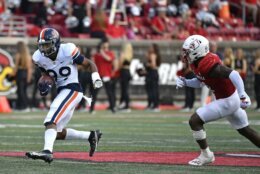 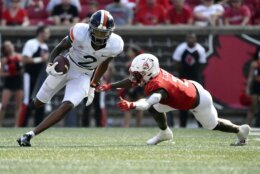 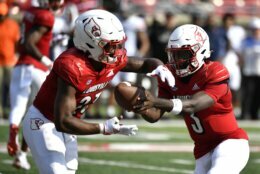 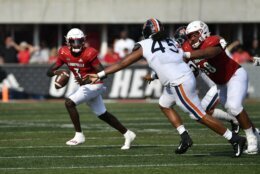 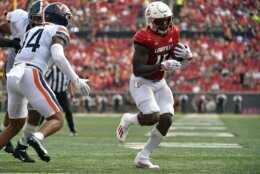 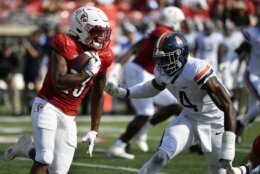 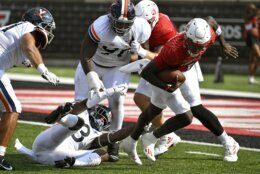 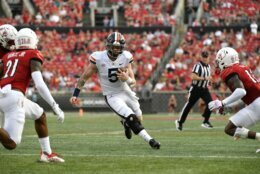 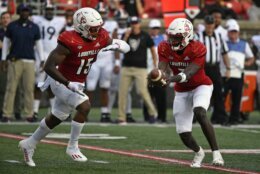 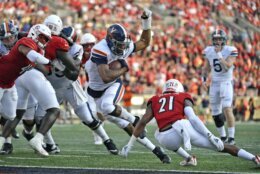 LOUISVILLE, Ky. (AP) — Virginia found itself down against Louisville as Saturday afternoon turned to Saturday evening, but quarterback Brennan Armstrong was not out.

He was lights out.

The junior quarterback threw for 487 yards on 40-of-60 passing, capping that performance with a 1-yard touchdown pass to Grant Misch with 22 seconds left to give the Cavaliers a stunning 34-33 comeback victory over Louisville on Saturday.

Virginia (4-2, 2-2 Atlantic Coast Conference) trailed 30-13 with 89 seconds left in the third quarter before starting its comeback. At that moment, the betting site FanDuel offered -5000 in-game odds on the host team, implying the Cardinals had a better than 98 percent of winning.

Armstrong had other ideas, and one of them was not to quit.

After throwing two third-quarter interceptions to help Louisville build its lead, Armstrong took advantage of the time he had. He went 15-of-22 down the stretch for 203 yards and two of his three touchdown passes.

The final moments had a bit of déjà vu for both teams. For Louisville, which lost last week at Wake Forest, it was the second straight game where its opponent scored the game-winner with :22 left. After escaping Miami with a win, Virginia again had to endure another last-second drive where its opponent was driving for a go-ahead field goal.

Malik Cunningham got Louisville to the Virginia 31 in the final seconds. However, James Turner’s 49-yard field goal attempt as time expired sailed left and the Cavaliers rushed out of Cardinal Stadium with an improbable victory.

“We just have to get better,” Louisville coach Scott Satterfield said. “We got to continue to grow as a football team and find ways to make one more one or two more plays.”

After trailing 13-10 at halftime, Louisville mounted its comeback behind junior running back Hassan Hall, who ran for 162 yards on 14 carries. His 52-yard touchdown on the first series of the second half gave Louisville its first lead of the day.

It was the first career 100-yard game for Hall, who did not play in the previous two games because of a shoulder injury.

Then, after Virginia punted from its own 34 with less than four minutes left in the game, Hall broke off a 53-yard run to the Cavaliers 27 that looked like it would seal it. But the Cavaliers forced Louisville to settle for a 40-yard field goal from Turner with 2:22 remaining to give Armstrong one last chance to be a hero.

As the clock dropped under three minutes remaining, Satterfield said he wanted to score a touchdown or at least get another first down, but he also wanted to make sure Virginia used all of its timeouts. Three straight run plays after Hall’s second big one of the day netted only five yards.

“That was disappointing that we didn’t get one more first down because that could have iced the game, but you had to take the field goal right there because it’s a three-point game, now we go up six and make them drive the ball with no timeouts,” he said.

Ra’Shaun Henry caught nine passes for 179 yards, and Keytaon Thomspson got 132 yards on his nine receptions for the Cavaliers.

Louisville’s first play from scrimmage on the day was a 91-yard touchdown pass from Cunningham to Tyler Harrell. The Cardinals have completed just six passing plays for 90 yards or more in the program’s history. Cunningham, who threw a 95-yarder to Ahmari Huggins-Bruce against Eastern Kentucky earlier this year, now has three of them. He also threw a 90-yard touchdown strike to Tutu Atwell against Syracuse in 2019.

Virginia: Just when it looked like the Cavaliers would squander an opportunity for victory, they found a way to rally from three scores down on the road. Still, it would not have been necessary had the Cavaliers not left points off the board in the first half. They racked up 282 yards in the half but that only yielded 13 points as they settled for Brendan Farrell field goals of 25 and 22 yards after driving inside the Cardinals 10.

Louisville: What should have been a satisfying come-from-behind victory for Louisville turned into a second consecutive last-minute, frustrating loss for Scott Satterfield’s team. Outside of the two big runs by Hall and a 24-yard run by Malik Cunningham, Louisville’s rushing game did little against the ACC’s worst rushing defense. But the defense ended up being the biggest culprit as the Cardinals allowed Virginia to convert 9-of-19 third downs, including three that were longer than 10 yards.

Louisville is off next week and will return to face Boston College at home on Oct. 23.

No. 24 Coastal Carolina looks rebound vs Troy after loss