Isaiah Neyor scored three touchdowns, two via passes from Chambers, as the Cowboys (2-0) built a 42-16 lead by late in the third quarter.

Wyoming intercepted Northern Illinois’ Rocky Lombardi three times, his first picks of the season and most since throwing three against Iowa in November 2020. Two of the three interceptions led to Wyoming touchdowns.

But Northern Illinois (1-1) rallied with four straight touchdowns to take a 43-42 lead with just under five minutes left. Lombardi fired a 14-yard strike to Trayvon Rudolph, and freshman Harrison Waylee, who had 179 yards rushing, tore off scoring runs of 75 and 14 yards to come within 42-36 early in the fourth. Clint Ratkovich scored his third touchdown to give Northern Illinois the lead.

On Wyoming’s final drive, Chambers drove the Cowboys 75 yards in 10 plays. Chambers went 13-of-23 passing for 204 yards with touchdown strikes of 33 and 19 yards to Neyor. Xazavian Valladay gained 101 yards on 21 carries with a TD.

UL Monroe squeaks out a win over Jackson State, 12-7 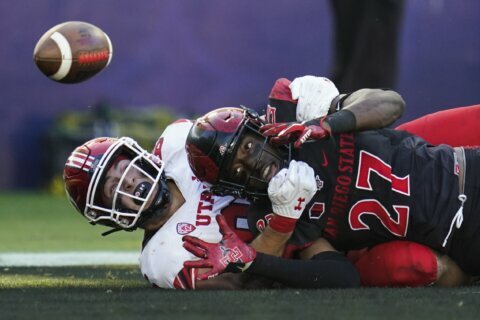