No. 6 Texas A&M will replace Mond at QB with King or Calzada

But with a veteran-laden defense and a powerful running game the sixth-ranked Aggies believe they can contend for their first national title since 1939 despite a new face at QB.

Fisher returns for his fourth season at Texas A&M after leading the Aggies to a 9-1 record last year with their only loss coming to national champion Alabama in the second game of the season.

Haynes King and Zach Calzada have both been taking snaps with the first team since camp started and Fisher wouldn’t say whether one of them leads the QB competition so far.

“We’re in a really, really good situation,” he said. “I love our (quarterbacks) room, however that situation turns out.”

Offensive coordinator Darrell Dickey also didn’t indicate who he favors for the job and raved about both players.

Regardless of who wins the job, Fisher and Dickey are counting on the team’s veterans to help make his transition to starter easier.

“The one thing you have to guard against with a new quarterback is the feeling they have to make every play, and everything is all on their shoulders,” Dickey said.

Running back Isaiah Spiller is expected to power Texas A&M’s offense after running for 1,036 yards as a sophomore last season. Spiller was a Doak Walker Award finalist in 2020 after ranking third in the SEC by averaging 103.6 yards rushing a game in a year where the Aggies ranked second in the league in yards rushing a game.

“He’s as good a running back as there is, as far as making people miss, running between the tackles, catching the ball out of the backfield, and then we can line him up in the slot,” Dickey said. “He’s a playmaker out there.”

Texas A&M’s running game should get a boost this season with the development of Devon Achane, a sprinter on the track team, who ran for 364 yards on just 43 carries as a freshman last season.

DeMarvin Leal leads a defense that returns nine starters, and the defensive end is projected to be one of the top players in the country. The junior led the Aggies last season with eight quarterback hurries and had 37 tackles. At 6-foot-4 and 290 pounds, Leal is a disruptive force whose fumble recovery against Florida last season set up Texas A&M’s game-winning touchdown.

Left guard Kenyon Green is the only returning starter on the offensive line. Green had a great 2020 season where he was named first-team All-America by FWAA and The Sporting News after helping the Aggies allow just seven sacks all year and rush for 205.1 yards a game. The 6-4, 325-pound Green started each game last season and has 23 starts in his career.

The Aggies open the season Sept. 4 against Kent State before playing Colorado in Denver on Sept. 11. They open SEC play Sept. 25 when they face Arkansas at AT&T Stadium in Arlington, Texas.

The game already circled on many calendars is Oct. 9 when Texas A&M hosts top-ranked Alabama. The Aggies will try to snap an eight-game skid to the Crimson Tide and get their first win in the series since a 29-24 victory in 2012 in Johnny Manziel’s Heisman Trophy-winning season.

The schedule also includes home dates against Auburn and South Carolina and visits to Missouri and LSU. 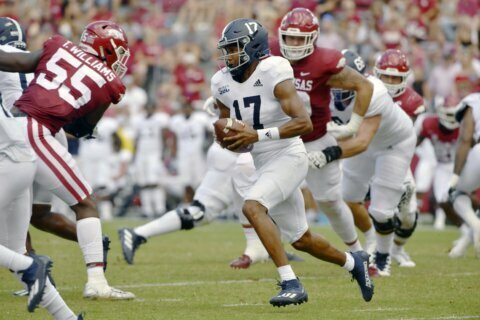 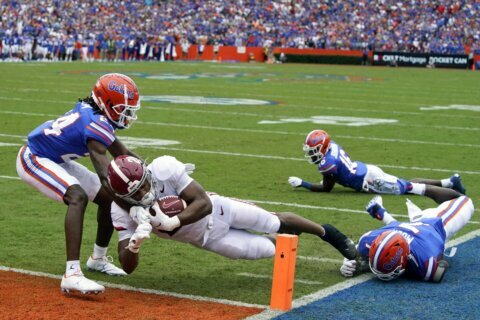