2019 Navy Football Preview: Something new in the air

Navy football has been a model of stability, but that doesn't mean you shouldn't expect big changes this year in Annapolis.
Listen now to WTOP News WTOP.com | Alexa | Google Home | WTOP App | 103.5 FM

In the highly volatile league that is the American Athletic Conference, Navy is a beacon of stability. Head coach Ken Niumatalolo isn’t just the longest-tenured coach at his respective school (he’s been at the helm since December 2007) — five other AAC schools are on their third coach since the Midshipmen joined the league. And it’s not just coaches who are coming and going: UConn has announced it will leave the conference to rejoin the reconfigured Big East. But just because the coach and the team aren’t going anywhere doesn’t mean there aren’t changes on the Annapolis campus.

As Navy enters Year 5 in the league, it wants to turn around a disturbing trend — after going 14-2 in regular season play with a division title in its first two seasons, the Mids went just 6-10 over the last two years. Throw in what is now a three-game losing streak to Army and a 10-loss campaign, the school’s worst since Paul Johnson’s first year in 2002, and Niumatalolo knew it was a time to re-examine his entire program.

The initial change was off the field — in the dining hall. For the first time, Navy football has a nutritionist working with the players in the program. There’s also a focus on improving the facilities moving forward. But while those changes will be behind the curtain, the most noticeable difference will be in the air this fall on a weekly basis in Annapolis.

Yes, you heard correctly: Navy plans to throw the football more this season. Last year, the team attempted less than 10 passes per game, sixth-fewest in FBS. Now that they’re facing the same schools every year in conference play, the coach has to mix things up.

The vibe is contagious.

“It’s been something that coach has spoken on and he’s extremely excited about,” said senior center Ford Higgins. “He’s brought in coach Billy Ray, who’s a passing mind that might not have been in the locker room before.”

“Billy Ray” Stutzmann comes to the Academy as an offensive assistant after working with the wide receivers at Hawai’i last fall, helping the Rainbow Warriors passing game rank ninth in the nation.

For the second straight year, Malcolm Perry will be the starting quarterback, but in a way 2019 will feel like his debut. In his career, the senior has thrown just 27 passes, as last year the Mids subbed Garrett Lewis and Zach Abey in passing situations while moving Perry to A-back (Navy’s option offense features one fullback and a pair of halfback-types split to each side, but ahead of the fullback). Coach Niumatalolo said that he made a mistake not going all-in on Perry as his quarterback last fall. Even with the limited passing experience the senior learned quite a bit that will help him this year.

“My biggest focus this offseason was my decision making,” said Perry. “And that goes for the option game, the passing game. That’s all in my hands now.”

Not to mention his feet. The senior has rushed for over 1,000 yards in consecutive seasons, and don’t forget that last fall Perry led the team in rushing, passing and receiving yardage in the win over Memphis. Junior fullback Nelson Smith averaged over five yards per carry last fall while A-backs C.J. Williams and Tazh Maloy showed sparks. The need for development at wide receiver is apparent, as the two leading returning receivers from 2018 are … C.J. Williams and Malcolm Perry.

Defensively there will be more of an overhaul from 2018, as the Midshipmen began last fall by coughing up 59 points at Hawai’i and finished near the bottom of the AAC against the pass while ranking dead last in sacks. Enter defensive coordinator Brian Newberry, who directed a Kennesaw State defense to a No. 2 ranking in FCS last season. The Owls led the Big South in rushing defense (102.1 yards per game), pass defensive efficiency (117.0) and red zone defense (76.9 percent), while standing second in sacks (31).

“We want controlled chaos, right? That’s what we talk about — toughness and elite effort,” said senior linebacker Paul Carothers. “Just to get after people. If we know what we’re doing and we understand our job and do it with elite effort, it’s gonna be hard to stop.”

Leading the pass rush will be a pair of linebackers, senior Nizaire Cromartie and sophomore Diego Fagot.

“It’s going to be a team that attacks, but there’s also structure to it,” said Niumatalolo. “It’s not reckless, where you’re playing zero coverage and blitzing seven every down.”

The defensive line boasts plenty of experience, but in order for the multiple looks shown by the back eight to work, they’ll need to produce better than last year’s pass rush.

Last year’s team was the most-traveled in FBS, venturing 26,496 miles for its six road games and two neutral tilts. And not all neutral games are created equally, as the Midshipmen faced Army in Philadelphia while heading to San Diego for their game against Notre Dame). It’s a good thing that as they try to turn around the program, this fall’s slate is front-loaded with home dates: five of their first seven games will be at Navy-Marine Corps Memorial Stadium in Annapolis, including their annual affair with Air Force.

“I think that’s big. As a team that’s young, just getting them on our field in front of our crowd early on,” said Perry. “I think that’s gonna help us rolling on into the season.”

A new twist on a longtime era begins Aug. 31 in Annapolis against Holy Cross. 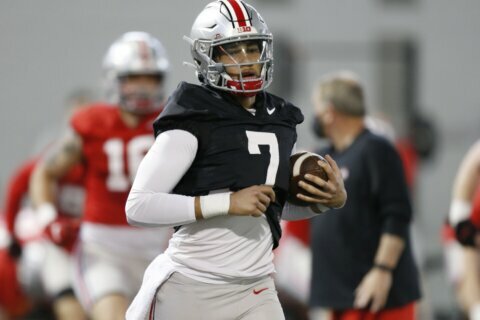 Lack of experience at QB an unusual situation for Ohio State 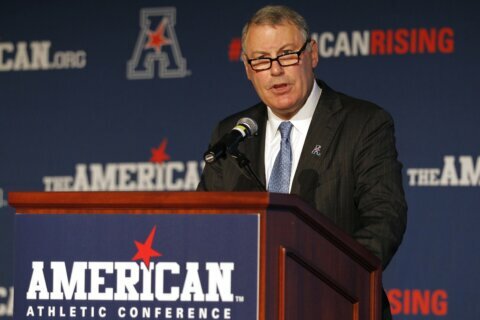