You know all the major college football rivalries, but there's one you may never have heard of, which is celebrated in a big way every year here in the D.C. area.
Listen now to WTOP News WTOP.com | Alexa | Google Home | WTOP App | 103.5 FM

ARLINGTON, Va. – College sports is built on the backs of its great rivalries. Every state seems to have at least one: Alabama-Auburn, Duke-North Carolina, Cal-Stanford. But there’s one rivalry celebrated each year around the country and beyond that you may never have heard of, and that is unique in the way it brings those on both sides together, rather than pitting them against one another.

It has recently been rebranded as the Brawl of the Wild, but most natives of Big Sky Country refer to it as Cat-Griz. The annual tilt between the Montana State Bobcats and Montana Grizzlies is one of the oldest rivalries in the country, with the 116th meeting between the two happening last Saturday.

“This is the main event in Montana,” said Jayne Visser, president of the Montana State Society, which calls itself “a place for Montanans who live in the Washington, D.C. area to celebrate our shared heritage.”

“I am born and raised in Missoula, and this is something that me and my family look forward to every year,” Visser said.

While the schools are rivals, there is a shared sense of community and attachment to their shared home state among those watching. There is no booing, no jeering, no yelling at one another. They share tables and pitchers of beer with one another, watching the game together.

Over 200 graduates and native Montanans packed the top two floors of Crystal City Sports Pub, actually a slightly smaller crowd than usual. In many years it pushes 300, a standing room only gathering that represents one of the largest individual Cat-Griz gatherings of the nearly 100 around the country.

“For years, we would try to do it in D.C., and we would run into the problem that when we would say that we get hundreds of people, no one would believe us,” said Lyndsey Medsker, a Montana State graduate who helps organize the yearly watch party.

Medsker lived in New York before moving to Washington. If the bar owners she spoke with knew how hard-core Montanans were at the watch parties she attended in Manhattan, maybe they would have believed her.

“For three or four years I organized the one in New York, and at that time we couldn’t get the game on TV, so we would listen to it on the radio,” she said. “It was still Montanans getting together.”

“This is the only football game I watch all year,” she said. “I don’t even watch the Super Bowl.”

Running since 1897, the rivalry has been played just one fewer time in its history than Army-Navy, and more times than “The Game” between Michigan and Ohio State or the Red River Rivalry between Texas and Oklahoma.

Montana has held the edge overall and the Grizzlies came into Saturday’s game better than two touchdown favorites. After a quick defensive three-and-out, they scored on their first offensive play and looked to be on their way to a fourth straight win within the rivalry. But the underdog Bobcats controlled most of the rest of the game, coming up with the big plays when it mattered to snag a 24-17 upset, much to the delight of Steven Foster. He grew up in Helena and played both tight end and right tackle for the Bobcats.

Foster, who works for Montana’s other Senator, Steve Daines, played in three Cat-Griz games. He found himself catching up with friends from both middle school and high school Saturday afternoon.

“I did know that there were watch parties all over, but I didn’t know it would be such a big deal here in D.C.,” he said. “But this is great. It’s better than I ever imagined.” 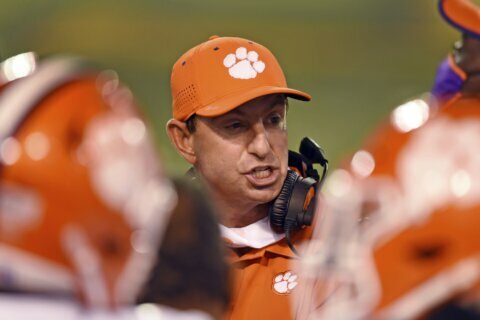