Sasser, Shead get hot in 2nd half as No. 1 Houston beats USF

Sasser scored 25 points and Shead had 13 as the backcourt mates combined to score 38 of Houston’s 46 second-half points. Sasser, a preseason All-American, finished 7 of 17 from the field, including 6 of 12 on 3-pointers. In the second half, Sasser and Shead combined to shoot 10 of 16 from the field and were 6 of 11 on 3s.

Tyler Harris scored a season-high 31 points, Russel Tchewa added 14 points and eight rebounds and Jamir Chaplin scored 14 points for the Bulls (7-10, 0-4), who lost their fourth straight. Harris was 9 of 13 from the field, including 6 of 10 on 3-pointers.

Noah Clowney added 15 points and Brandon Miller finished with 14 for the Crimson Tide (14-2, 4-0 Southeastern Conference), who turned a tie game into a 12-point advantage with a 16-4 run midway through the second half. Alabama added a late 11-0 run to put away its fifth straight victory.

Miller, who came in as the SEC’s leading scorer at 18.1 points per game, didn’t attempt a shot in the first half, which ended tied at 33.

UConn (15-3, 4-3) has lost three of its last four, with all the defeats on the road against opponents currently ranked in the AP Top 25.

Olivier-Maxence Prosper scored 17 points and Kam Jones added 15 — all in the second half — for Marquette.

AUSTIN, Texas (AP) — Marcus Carr made the go-ahead 3-pointer with a minute to play and Sir’Jabari Rice hit three free throws over the final six seconds, sending Texas to a wild win over TCU.

The Horned Frogs led by 18 in the first half and appeared in total control on their way to what would have been the program’s first road win over a top-10 opponent.

But Texas (14-2, 3-1 Big 12) chipped away in the early minutes of the second half and rallied behind Rice and Dylan Disu, who combined for 27 points after halftime. Rice scored 10 in a row during one burst and Disu had 12 in a five-minute span as Texas tied it 71-all on his layup.

Timmy Allen scored 17 points to lead the Longhorns. Rice had 15, all in the second half.

After Carr’s 3 gave Texas the lead, TCU’s Emanuel Miller had a chance to tie it with a three-point play but missed the free throw. Miller scored 21 points to lead TCU (13-3, 2-2).

Baylor Scheierman led Creighton (9-8, 3-3) with 25 points. Ryan Nembhard scored 17 and Trey Alexander had 16 for the Bluejays.

Xavier led by seven points with 1:31 left but Nembhard scored the next five and Creighton had a chance to tie or take the lead in the closing seconds. A steal with 13 seconds left denied that opportunity, and Boum then made four free throws in the last five seconds.

Miami shot 12 for 18 from behind the arc and never trailed after a 13-0 run midway through the first half.

DeMarr Langford finished with 20 points and Makai Ashton-Langford added 19 for the Eagles (8-9, 2-4).

Dexter Dennis had 13 points and 12 rebounds for the Aggies (11-5, 3-0 Southeastern Conference), who won their fifth straight. Henry Coleman III had 10 points and 10 rebounds.

Texas A&M held Missouri without a field goal for almost 11 minutes and led by 18 points at halftime. But the Tigers used a full-court press and got within four in the second half.

Trazarien White had 16 points and eight rebounds to lead UNCW (14-4, 4-1). Jamari Thomas also scored 16, including two big 3-pointers in the second half.

DURHAM, N.C. (AP) — First-year big man Kyle Filipowski had a season-high 28 points and matched his season high of 15 rebounds, and Duke rallied from 12 points down to beat Pittsburgh.

The 7-footer was the center of the offensive effort for the Blue Devils (13-4, 4-2 Atlantic Coast Conference), making 8 of 14 shots and 11 of 13 free throws. Fellow freshman Tyrese Proctor added 14 points for Duke.

Duke had a 15-0 run during the game-turning stretch. 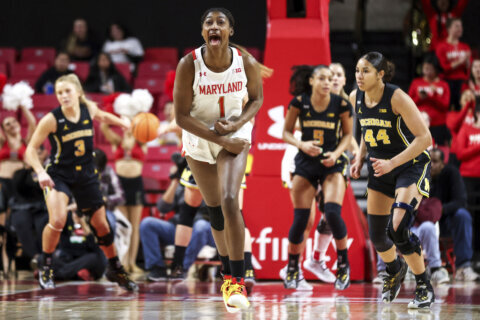