Aliyah Boston had 23 points and 18 rebounds to back up her AP National Player of the Year award and carry South Carolina to the NCAA championship game with a 72-59 victory over Louisville in the semifinals on Friday night.
Listen now to WTOP News WTOP.com | Alexa | Google Home | WTOP App | 103.5 FM
(1/8) 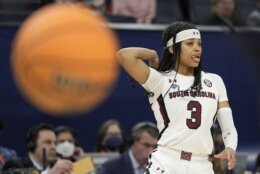 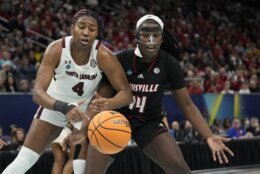 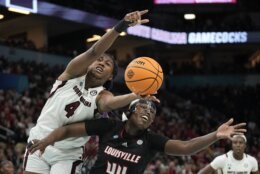 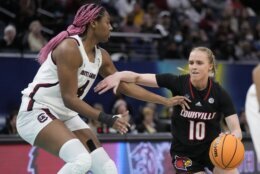 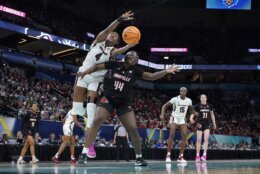 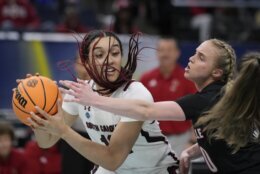 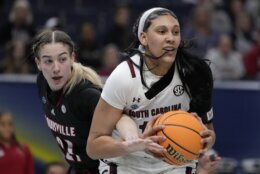 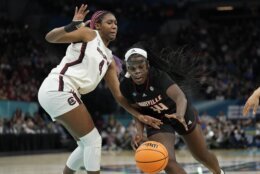 MINNEAPOLIS (AP) — This time, Aliyah Boston and the South Carolina Gamecocks were smiling as they strutted off the court at the Final Four.

The only crying came from relief and joy, one year after a painfully opposite finish in the national semifinals.

Boston took over after halftime and finished with 23 points and 18 rebounds to back up her AP National Player of the Year award, carrying South Carolina to the NCAA championship game with a 72-59 victory over Louisville on Friday night.

Brea Beal matched her season high with 12 points and helped hold Cardinals star Hailey Van Lith to nine points on 4-for-11 shooting as the Gamecocks (34-2) delivered another stifling defensive performance and advanced to meet Connecticut, a 63-58 semifinal winner over Stanford, on Sunday night.

“Life in general, it’s going to throw tests at you. You’re going to have to pass the tests or you’re going to have to retake them,” said coach Dawn Staley, who will try to win her second national championship with South Carolina eight months after the Hall of Famer led the U.S. team to a gold medal in the Tokyo Olympics.

Destanni Henderson scored 11 points with 3-for-6 shooting from 3-point range for South Carolina, which had a 19-5 assists advantage and improved to 13-0 this season against AP-ranked opponents.

Emily Engstler led Louisville with 18 points and nine rebounds as the Cardinals went 1 for 8 from 3-point range and were never able to find a rhythm in the half court against the No. 1 overall seed in this tournament.

South Carolina, which won it all in 2017, was ousted in the semifinals last season by one point to eventual champion Stanford when Boston’s put-back attempt bounced off the rim at the buzzer. The 6-foot-5 junior from the U.S. Virgin Islands has bounced right back a year later, and the Gamecocks have followed her lead.

“We knew that were going to be tested, and this is the hump that we need to get over,” Boston said.

Kianna Smith and Olivia Cochran each scored 14 points for the Cardinals (29-5), who were the only team in this Final Four without an NCAA championship in their trophy case. This was the program’s fourth trip to the national semifinals in coach Jeff Walz’s 15 seasons.

“You don’t ever want to say that’s your favorite team, because then all your past teams get mad at you, but I’d put this group right up there at the top,” Walz said. “It was just an absolute joy to coach.”

The Gamecocks, who were the wire-to-wire No. 1 team in the AP poll this season, squeezed their first four tournament opponents in the Greensboro Region to a bleak average of 41.2 points on their way to a fourth Final Four in the last seven years.

The Cardinals, one of the three No. 1 seeds in this Final Four, made it out of the Wichita Region without any trouble. Van Lith, the relentless sophomore guard with the perpetually flopping blond pigtails, hit the 20-point mark in each of their first four tournament games.

Van Lith met her match with Beal, who had a four-inch height advantage and shadowed her all over the court as she often does to the opponent’s most dangerous player. Van Lith, whose first basket came on a knifing drive for a layup with 1:43 left in the second quarter, had two jumpers blocked by Beal and three turnovers in the first half.

Engstler, the tough-as-nails transfer from Syracuse, helped Louisville keep Boston from getting too comfortable in the paint while Cochran helped with the muscle. Physical play can come with a price, though, and with 4.2 seconds left in the third quarter Boston drew Engstler’s fourth foul on a putback layup and stretched the lead to 57-48 with the and-one free throw.

Engstler fouled out with 4:56 to go and had her head buried in her clenched hands on the bench as her teammates tried to console her.

“I think we should all leave this arena and Minneapolis with our heads held very high. I’m extremely proud of this team, and I’ve had an amazing time with them,” Engstler said.

After putting up 28 points and 22 rebounds in the Sweet 16 against North Carolina, Boston had plenty left for the Final Four.

Wearing her familiar vibrant braids in a bright-pink-and-purple combination, Boston helped the Gamecocks set a commanding tone early with an 11-2 lead. The Cardinals missed seven of their first eight shots from the floor.

Louisville enjoyed a 12-0 run early in the second quarter to take a short-lived three-point edge, but South Carolina simply had so much more to offer after that. Henderson’s 3-pointer gave the Gamecocks their largest lead at 51-36 midway through the third quarter, and the Cardinals were only within less than eight points for 42 seconds after that.

Boston had 15 points and 10 rebounds in the second half.

“The game just opened up,” she said. “We were able to continue to move the ball.”

The entire South Carolina team stayed off the court during the national anthem, keeping with the Gamecocks’ practice all season. Last season, several players took a knee during the singing of “The Star-Spangled Banner.”