No. 2 Baylor poised for top after win over No. 6 Villanova

WACO, Texas (AP) — James Akinjo had 16 points with seven rebounds and second-ranked Baylor defensively dominated No. 6 Villanova 57-36 on Sunday, a victory that’s likely to put the defending national champion Bears in the top spot in the new poll.

The Bears (9-0) never trailed in their first nonconference home game ever against a top-six opponent, this one a rematch of an NCAA Sweet 16 game last March in Indianapolis. This Big East/Big 12 Battle matchup featured the teams that won three of the last five NCAA titles.

Villanova (7-3) shot only 22% (12 of 54) and had several extended scoring droughts while being held to its fewest points in 689 games under coach Jay Wright, who is in his 21st season.

Adam Flagler had 10 points as Baylor, which won its 15th game in a row dating to last season, shot 39% (22 of 56) and was held under 69 points for the first time this season. Jeremy Sochan had nine points and 10 rebounds before fouling out.

Justin Moore had 15 points for the Wildcats.

NEW YORK (AP) — Trevion Williams had a season-high 22 points to go with 12 rebounds and a career-best nine assists to help Purdue rally past North Carolina State in overtime in the Basketball Hall of Fame Invitational.

Jaden Ivey added 22 points for the Boilermakers (9-1), who had to rally from 13 down midway through the second half. Purdue never led in regulation, taking its first lead Sasha Stefanovic’s 3-pointer 15 seconds into the extra period.

Stefanovic also hit a driving layup with 21.5 seconds left to force the overtime, ultimately helping Purdue bounce back from a last-second loss at Rutgers in the program’s first-ever week atop the AP Top 25.

Freshman Terquavion Smith scored a season-high 21 points for the Wolfpack (7-3), who had a prime chance to earn the program’s first win against a top-ranked opponent in nearly nine years.

LOS ANGELES (AP) — Isaiah Mobley had 21 points and 12 rebounds, and Southern California pulled away at the beginning of the second half on its way to beating Long Beach State.

The Trojans (10-0) continued their best start since the 2016-17 season, when they opened 14-0. Drew Peterson added 15 points and Max Agbonkpolo had 11 points for USC, and Mobley had his fourth double-double in five games.

NEW YORK (AP) — Donta Scott scored on a leaning shot in the post with 16.8 seconds left, No. 20 Florida missed its final-play 3-pointer and Maryland beat the Gators in the Basketball Hall of Fame Invitational.

Eric Ayala and Fatts Russell each scored 19 points for the Terrapins (6-4), who shot 49% and hit 8 of 13 3-pointers to snap a three-game skid. It was Maryland’s first win in two tries under interim coach Danny Manning, who took over Dec. 3 after Mark Turgeon departed in a decision the school said was mutual.

Tyree Appleby scored 15 points on five 3-pointers, including one against Russell with 1:14 left that pushed the Gators (7-3) to a 66-65 lead. Florida also got a tying layup from Anthony Duruji with 43.5 seconds left, setting up Scott’s tough shot against Myreon Jones in the post for the win.

The Gators also got 15 points from Phlandrous Fleming Jr.

Kadary Richmond added 12 points for the Pirates (9-1), and Alexis Yetna had 10 points and seven rebounds. Myles Cale also chipped in with 10 points.

Caleb McConnell had 13 points and 12 rebounds for the Scarlet Knights (5-5), who were coming off a thrilling win Thursday night at home over No. 1 Purdue on a 3-pointer at the buzzer by Ron Harper Jr. from just inside half court.

Harper was held to 10 points in this game. Cliff Omoruyi added 13 points and six rebounds for Rutgers. 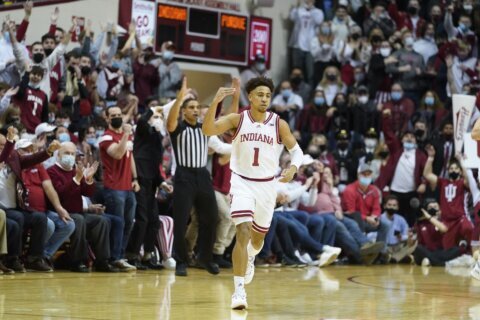