BOTTOM LINE: Jackson State and Drake look to bounce back from losses. Both teams are coming off of losses in their last game. Drake lost 90-80 in overtime in Atlanta to Clemson on Saturday, while Jackson State came up short in a 66-56 game at Northern Iowa on Tuesday.

STEPPING UP: Jayveous McKinnis is averaging 11.1 points, 10.3 rebounds and 2.8 blocks to lead the charge for the Tigers. Ken Evans Jr. is also a primary contributor, accounting for 6.6 points and 4.9 rebounds per game. The Bulldogs have been led by Tucker DeVries, who is averaging 13.9 points and four rebounds.DOMINANT DEVRIES: DeVries has connected on 38 percent of the 71 3-pointers he’s attempted and has made 12 of 26 over his last three games. He’s also made 76.9 percent of his free throws this season.

STREAK STATS: Drake has won its last five home games, scoring an average of 81.2 points while giving up 62.2.

DID YOU KNOW: Drake is rated second among MVC teams with an offensive rebound percentage of 29 percent. The Bulldogs have averaged 9.6 offensive boards per game. 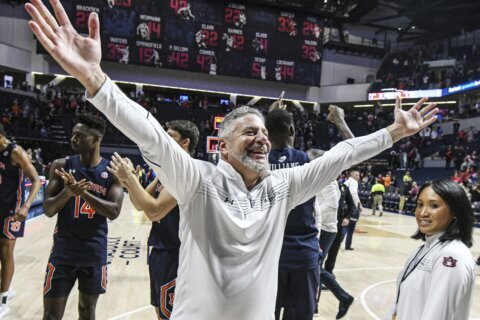 No. 2 Auburn gets showdown with No. 12 Kentucky