Josh Caldwell scored 18 points on 8-of-15 shooting and Jalen Rucker and Chris Mann added 12 each for the Black Knights (6-6). Army shot 40% and made 9 of 18 from the arc but gave up 29 points off turnovers and was outscored by 20 in the paint. They had eight shots blocked.

South Carolina took control late in the first half, leading by 18 at the break. The lead never dipped below 16 in the second half with the Gamecocks going up by as many as 32. It was the second time in three games the Gamecocks scored over 100 points, the other coming against NAIA-member Allen.

Army held an early lead for seven minutes of the first half before matters unraveled for the Black Knights with the Gamecocks shooting 67% and scoring 23 points off 12 Army turnovers to lead 61-43.

This was only the second meeting between the programs. Army defeated South Carolina 59-45 in the quarterfinals of the 1969 NIT at Madison Square Garden. 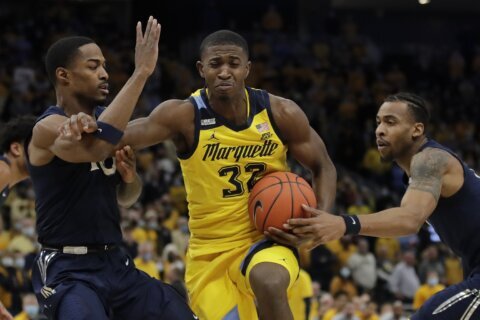