Devoe made 3-of-5 3-pointers and added seven assists and five rebounds, continuing his strong play in the first week of the season. He scored 26 points, making 4-of-6 3-pointers, in a season-opening loss to Miami (Ohio) and is shooting 52% overall, including 7-of-11 from 3-point distance.

Usher, who scored 14 points in the opener, had 14 points and 11 rebounds against Stetson. He had five assists as Georgia Tech’s starters combined for 18 assists.

Georgia Tech (1-1) led 39-22 at halftime and the lead first reached 20 midway through the second half after the Yellow Jackets hit several 3-pointers. They finished 9 of 19 from beyond the arc.

There were only six made free throws in the game. Stetson made 4-of-7 and Georgia Tech was 2-of-7 from the line. 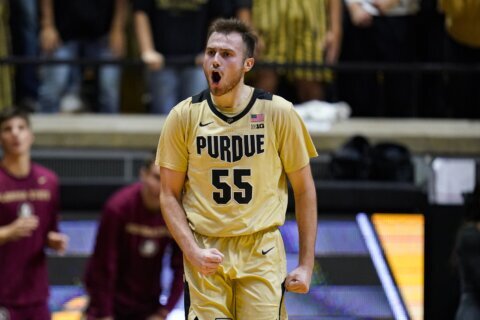