SAN LUIS OBISPO, Calif. (AP) — Liz Dixon scored 15 points and No. 10 Louisville rolled in its first visit to California in seven years with a 72-32 rout of Cal Poly on Tuesday night.

It was the first time a top-10 team has ever played at Cal Poly.

The reason for Louisville’s first game in California since 2014 was Kianna Smith, whose father, John Smith, is the head men’s basketball coach at Cal Poly.

Kianna Smith, a native of Moreno Valley, California, made three 3-pointers and finished with 11 points for the Cardinals (4-1). Her dad sat courtside as the men’s team had the night off before playing a tournament game tomorrow in San Juan Capistrano, California.

Sheldon was 12 of 15 from the field to top her previous high of 29 points. She also had three steals as Bellarmine turned it over 28 times. 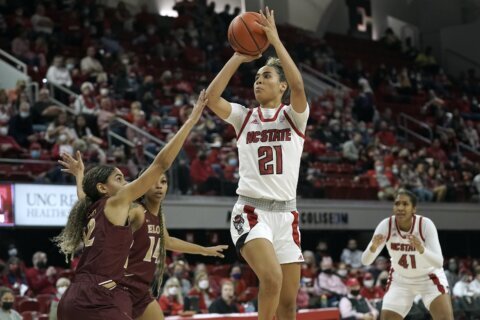