COLUMBIA, S.C. (AP) — Keyshawn Bryant splashed his first 3-pointer of the season off the glass, scoring 11 of his 17 points after halftime and sparking South Carolina to rally past Rider 65-58 on Sunday.

The 6-foot-7 Bryant, coming off a five-game suspension for an unspecified violation of team rules, played 20 minutes Sunday, hitting 6-of-10 from the floor, including the lone 3, with five rebounds, two assists, two steals and three blocked shots.

Jermaine Couisnard added 13 points and Erik Stevenson 10 for the Gamecocks (5-1), who have now won four in a row after a tight loss to Princeton.

Dwight Murray scored 15 points with eight rebounds and six assists for Rider (3-5), which responded to South Carolina’s game-opening bucket with an 11-0 run to lead for the remaining 18 minutes of the first half.

The Broncs, of the Metro Atlantic Athletic Conference, were still ahead 36-33 until Bryant banked home his high-arcing 3-pointer from well behind the line. 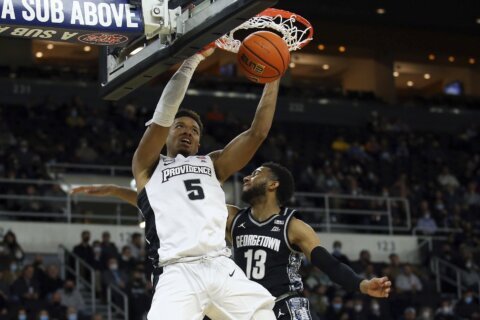