With N’Faly Dante’s return, No. 13 Ducks hope to play bigger

Oregon hopes it can incorporate its newcomers quickly in a tough conference that exceeded expectations. The No. 13 Ducks, who…
Listen now to WTOP News WTOP.com | Alexa | Google Home | WTOP App | 103.5 FM

Oregon hopes it can incorporate its newcomers quickly in a tough conference that exceeded expectations.

The No. 13 Ducks, who have won back-to-back Pac-12 regular season titles, were hampered last season by injuries, forcing the team to play smaller than planned.

But this season Oregon expects to see the return of 6-foot-11 center N’Faly Dante, who played in just six games last season before an ACL injury. The team also shored up its front court with the addition of Quincy Guerrier, a 6-8 transfer from Syracuse who averaged 13.7 points and 8.4 rebounds last season.

Other key additions this season include guard De’Vion Harmon, a transfer from Oklahoma, guard Jacob Young, a transfer from Rutgers, and 7-foot center Nate Bittle, a five-star recruit from Central Point, Oregon. In all, there are seven newcomers.

“We’re moving along kind of slow now. I know they’re frustrated because we’re not moving quicker, especially the vets who have a pretty good idea of what we’re doing,” Altman said. “With so many new guys it’s taken a little longer and that frustrates the players, the coaches sometimes. But I think if we keep working at it, we have a chance to be a good team.”

Oregon went 21–7 overall last season and 14-4 in Pac-12 play. Seeded seventh in the NCAA Tournament, the Ducks advanced out of the first round against VCU because of coronavirus protocols.

Oregon beat Iowa in the second round before falling to USC in the Sweet Sixteen. It was the fifth time the Ducks had advanced to the round of 16 under Altman.

This season, the Ducks were picked to finish second in the Pac-12, behind UCLA, which went to the Final Four last season.

The Pac-12 sent three teams to the Elite Eight last spring and had a league-record 13 NCAA Tournament victories and is expected to be good once again.

WHERE THERES A WILL

Guard Will Richardson is embarking on his fourth season with the Ducks and will be instrumental to the team’s success this year.

Although he played behind Payton Pritchard at the start of his career in Eugene, he took over as a starter last year with an average of 11.3 points and 3.9 assists. But he, too, missed time because of injury.

“Will understands the league, he understands what we’re up against,” Altman said. “He was injured last year and I think that gives him a different perspective because he had to sit there for 12-13 games and that makes a player appreciate the game a lot more.”

Among the key Ducks who moved on following last season’s run were Eugene Omoruyi and Chris Duarte.

Duarte, who averaged 17.1 points last year and was named the AP Pac-12 Player of the Year, left school early and was drafted with the 13th overall pick by the Pacers. In Indiana’s season opener, he scored 27 points.

Omoruyi also averaged 17.1 points for the Ducks last season along with 5.4 rebounds. He went undrafted but signed a two-way contract with the Dallas Mavericks.

Altman, entering his 12th season with the Ducks, signed a one-year contract extension over the summer that could keep him in Eugene through the 2026-27 season. He’s set to make $4 million his final year.

Oregon is 280-109 with 11 straight 20-win seasons under Altman. The Ducks have gone to the NCAA Tournament seven times, including a run to the Final Four in 2017.

Oregon opens the season against Texas Southern on Nov. 9. The Ducks host BYU for the Phil Knight invitational in Portland on Nov. 16 before heading to the Maui Invitational in Las Vegas at the end of the month. 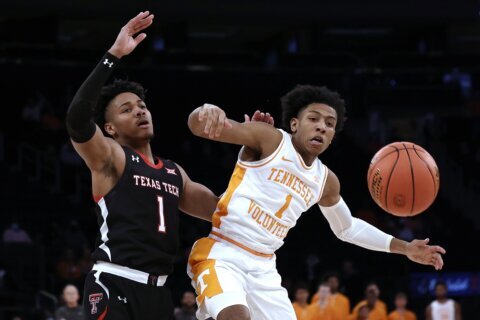 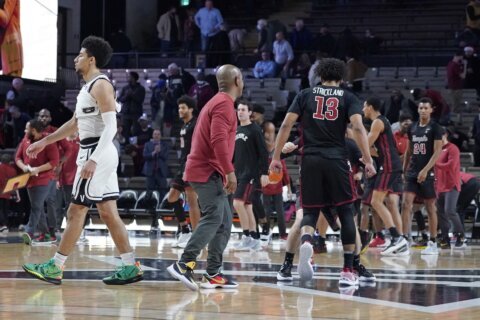