Oklahoma State to move on without No. 1 pick Cade Cunningham

Oklahoma State will learn much about where its program stands now that Cade Cunningham is in Detroit after being the…
Listen now to WTOP News WTOP.com | Alexa | Google Home | WTOP App | 103.5 FM

Oklahoma State will learn much about where its program stands now that Cade Cunningham is in Detroit after being the top pick in the 2021 NBA draft.

“I don’t know if we’ll be better than last year’s team if you just look at the talent because we do not have the No. 1 pick on our team anymore,” Oklahoma State coach Mike Boynton said. “But we have some other guys that will have another chance to maybe make it at that level of basketball. When you have multiple guys like that, you get your guys to buy into each other, it gives you a chance.”

Boynton has reason to believe the Cowboys will remain competitive, though Oklahoma State still is awaiting a ruling from the NCAA on an infractions case that could cost them a postseason slot. Plenty of talent is back from a team that went 21-9 and reached the second round of the NCAA Tournament while the case was under appeal.

The top returning scorer is guard Avery Anderson. He came on late last season and averaged 12.2 points per game. He scored 31 points in the regular-season finale against West Virginia, then scored 20 points in Oklahoma State’s win over Baylor in the Big 12 Tournament — Baylor’s last loss before its run to the NCAA title. He added 21 points in the first-round NCAA Tournament win over Liberty.

Isaac Likekele averaged 9.1 points and 6.6 rebounds last season in his third year with the program.

Twins Kalib and Keylan Boone are back, too. Kalib averaged 9.4 points and 5.4 rebounds last season while Keylan averaged 4.4 points and 4.1 rebounds.

The stable of returnees puts Boynton in a much better position than he was in when he took over before the 2017-18 season.

“I feel like our program has taken baby steps in the right direction each year and revamped our roster in four years to where we feel we can be really competitive on a nightly basis,” he said. “We feel like our roster is really, really healthy, is going to be one of the more competitive teams that has been at Oklahoma State in a long time.”

Likekele was Oklahoma State’s starting point guard for two years before Cunningham arrived and took over. Boynton liked the way Likekele handled it and hopes he can transfer that into a role as team leader.

“We need him to step up and be that guy who passes along our message from our staff to our players every day in the locker room, not just go out there and play well, put up great numbers, but have a pulse of what winning looks like and making sure that’s happening every day whether practicing or whether the guys are going to class, the way our locker room looks, all those type of things that really matter but go unnoticed sometimes,” Boynton said.

Moussa Cisse has transferred to Oklahoma State from Memphis. The 7-footer from Conakry, Guinea, was named the American Athletic Conference Rookie of the Year last season after averaging 6.6 points, 6.3 rebounds and 1.6 blocks in just 18.6 minutes per game.

The Cowboys open Nov. 9 at home against Texas-Arlington. They will play at Oral Roberts and star scorer Max Abmas on Nov. 26, then host Wichita State on Dec. 1. They host Xavier on Dec. 5. Oklahoma State faces No. 15 Houston on Dec. 18. The Cowboys close the early non-conference schedule against USC on Dec. 21 in Oklahoma City. 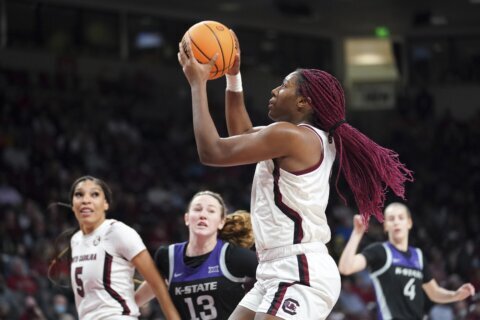 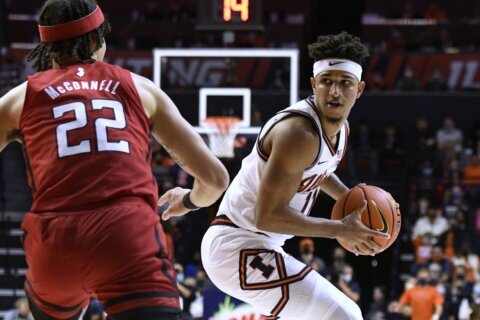