BOTTOM LINE: Vermont looks for its 21st straight win in the head-to-head series over Maine. In its last 20 wins against the Black Bears, Vermont has won by an average of 20 points. Maine’s last win in the series came on Jan. 22, 2013, a 71-68 victory.

LEADING THE WAY: Vermont’s Ryan Davis has averaged 20.5 points and 7.3 rebounds while Ben Shungu has put up 10.9 points and 5.1 rebounds. For the Black Bears, Stephane Ingo has averaged 11.4 points, 9.7 rebounds and three blocks while LeChaun DuHart has put up 12.7 points.

AMERICA EAST IMPROVEMENT: The Catamounts have scored 74.4 points per game across eight conference games, an improvement from the zero per game they managed against non-conference competition.DOMINANT DAVIS: Davis has connected on 50 percent of the 18 3-pointers he’s attempted and has gone 7 for 15 over his last five games. He’s also made 80 percent of his free throws this season.

THREAT FROM DISTANCE: Maine’s DuHart has attempted 46 3-pointers and connected on 41.3 percent of them, and is 9 of 21 over the past three games.

DID YOU KNOW: Vermont is ranked first among America East teams with an average of 74.4 points per game. The Catamounts have averaged 78 points per game over their last three games. 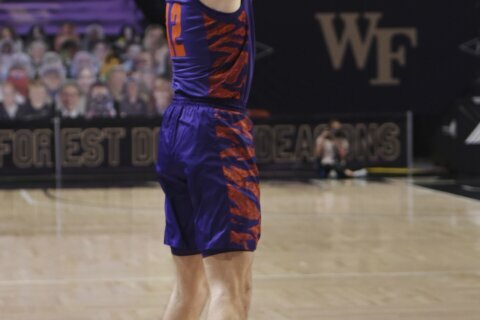