BOTTOM LINE: Loyola of Chicago looks for its fifth straight conference win against Bradley. Loyola of Chicago’s last MVC loss came against the Indiana State Sycamores 76-71 on Jan. 10. Bradley lost 71-56 to Illinois State in its most recent game.

STEPPING IT UP: The Ramblers have scored 77.1 points per game and allowed 54.4 points per game across seven conference games. Those are both significant improvements over the 71.6 points scored and 63.6 points given up per game to non-conference foes.CLUTCH CAMERON: In 13 appearances this season, Loyola of Chicago’s Krutwig has shot 61.4 percent.

STREAK STATS: Bradley has won its last five home games, scoring an average of 80.4 points while giving up 61.

GETTING DEFENSIVE: Loyola of Chicago has held opposing teams to 57.3 points per game this season, the third-lowest figure among all Division I teams. The Ramblers have allowed just 47.5 points per game over their four-game winning streak. 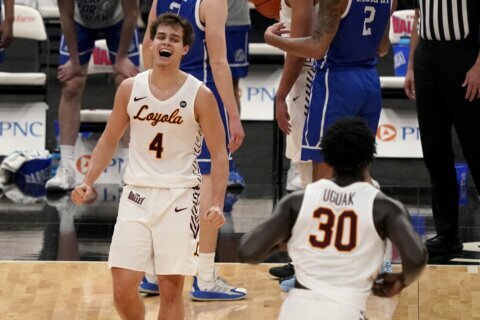