Maryland women's basketball starts this season ranked No. 12 in The Associated Press Preseason Poll while being picked second in the Big Ten by the coaches and third by the media.
Listen now to WTOP News WTOP.com | Alexa | Google Home | WTOP App | 103.5 FM

When the Maryland women’s basketball team saw its March ripped away in 2020, the Terps were on track to get their first No. 1 seed in the NCAA Tournament since 2015, the last time they advanced to the Final Four.

The end of the season meant saying goodbye to four-year starter Kaila Charles, as well as fellow seniors Blair Watson, Stephanie Jones and Sara Vujacic. But even with those losses, Head Coach Brenda Frese would have a solid nucleus coming back to College Park.

And then the offseason like none other took place: Two starters transferred. Six-foot-five forward Shakira Austin (voted to the All-Big Ten Second Team) departed for Mississippi while Taylor Mikesell (led the conference in 3-pointers) left for Oregon. Not many programs could survive the loss of so much talent.

However, Maryland starts this season ranked No. 12 in The Associated Press Preseason Poll while being picked second in the Big Ten by the coaches, and third by the media.

Part of what has folks still high on Maryland is the addition of five-star prospect Angel Reese. The 6-foot-3 forward from Baltimore and St. Frances Academy was the top rated wing player by espn.com’s HoopGurlz. On a revamped roster with plenty of minutes available, Reese will be a big building block for the Terps.

“Obviously I knew how talented she was, it’s all the other intangibles for me with her. Most freshmen, they come in and have to figure it all out as they’re learning,” Frese said. “Angel has come in and has really developed into a strong leader right out of the gate.”

One of the many things Frese has done very well in her tenure is integrate freshmen into her rotation, from Kristi Toliver on the 2006 National Championship team to the most recent two Big Ten Freshmen of the Year (Taylor Mikesell in 2019 and Ashley Owusu in 2020).

“I knew when I came here that Coach Frese would put me in a good position to be successful, not to limit me to one thing. I am 6-foot-3 but she doesn’t limit me to be just in the post,” Reese said. “Just having people around me, a winning program, players that have the same goals as me has been great.”

Owusu and Diamond Miller are two returnees who saw major minutes last winter. Owusu finished second in the conference with 5.4 assists per game while Miller averaged 19 minutes off the bench for the Big Ten champs.

“The game has slowed down for both of them, and you can just really see for Ashley just that poise and that calming influence,” Frese said. “The confidence that she has to make plays for herself and her teammates.”

Redshirt freshman Zoe Young and redshirt junior Channise Lewis are both coming off of knee injuries that robbed them of the 2019-20 season. Faith Masonius didn’t play a lot as a freshman but looks to make the leap into the rotation this winter.

“We just have a lot more different weapons — although not everybody knows quite yet — who can shoot the ball from some distance,” Frese said.

Added to the mix this season are three transfers: redshirt sophomore Mimi Collins sat out last year and averaged five points with three rebounds in her one season at Tennessee, Katie Benzan was a three-time All-Ivy League selection while at Harvard and Chloe Bibby was on a national championship team at Mississippi State.

The senior from Australia is ready for another run in her new stop.

“The amount of talent that we have on this team is ridiculous,” Bibby said. “At the end of the day we understand that, ‘I need to pass the ball to get that great shot, not just a good one.'”

Maryland has dominated the Big Ten since it joined the league in 2014, finishing second once, tying for first twice and winning the league outright three times. But this winter, four other schools are in Top 25, with another also receiving votes.

But the contenders still have to play their way past Maryland. And even with a revamped roster, the Terps are reloaded for a run. 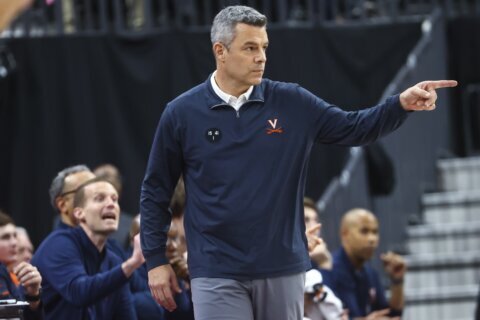