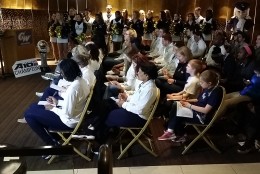 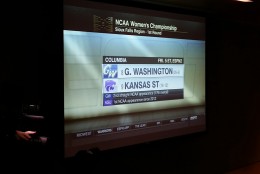 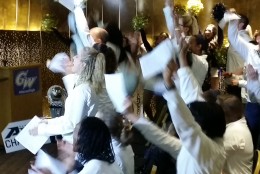 WASHINGTON — The George Washington women’s basketball team will begin play in the NCAA Women’s Division I college basketball tournament in the Sioux Falls regional against 9 seed Kansas State from the Big 12 as they try and win their first ever national championship.

After the selection was made, Coach Jonathan Tsipis said that they are glad to be playing closer to home this time compared to last year, when they played clear across the country, in a first-round loss against Gonzaga.

“We’re excited to get our fans there,” Tsipis said, referring to South Carolina. “That was something that last year with having to go to Oregon, it was really hard for our fans to be able to get there. … It’s a site that’s a drivable distance and defiantly want to make sure that the GW fan base comes out and comes out loud.”

The 26-6 Colonials, in their second straight NCAA Tournament appearance, and the first time since back-to-back trips in ’07-’08, are making their 17th overall appearance in the tournament.

George Washington will lean on senior forward Jonquel Jones, who missed time in the regular season with a shoulder injury, but made it back for the Atlantic 10 Tournament, which the Colonials won, punching their ticket to the NCAAs. Junior forward Caira Washington, the A-10 Tournament Most Outstanding Player, is looking forward to playing Kansas State with a little bit of revenge in mind from last season

“I think last year it was a great experience for us to get a feel for everything, this year we’re definitely ready and we want to prove ourselves and go even further this year,” said Washington.

For the Colonials to get farther, they need to beat the 18-12 Wildcats, who lost their last three games — including a quarterfinal loss in the Big 12 Tournament to West Virginia.

If they can do that, they would then face 1 seed South Carolina, the top seed in the region. South Carolina is 31-1 on the year — the lone loss to UConn, who are undefeated this season — on a 69-game win streak and in search of their fourth championship in a row.

The Final Four and Championship will be at Bankers Life Fieldhouse in Indianapolis, Indiana on April 3 and 5.