Holidays: Where to see holiday lights | Santa's back with inflation, inclusion on his mind | 4 ways to limit your holiday debt | Inflation 'definitely a guest' at holiday celebrations this year
Home » NBA News » Wembanyama's 2-game Las Vegas…

HENDERSON, Nev. (AP) — Victor Wembanyama blocked a shot Thursday afternoon, ran to the other end of the court, went airborne from just inside the foul line, corralled an alley-oop pass with one hand and slammed home a dunk.

It may have been the signature moment — and there were a lot of candidates — from Wembanyama’s two-game trip to the U.S., which ended Thursday with the French phenom’s Metropolitans 92 team rallying from 16 points down to top the G League Ignite 112-106. He led the way, of course, with 36 points and 11 rebounds.

“As a first impression of the American game, that was really great,” Wembanyama said.

His final numbers from two exhibitions: 73 points on 22-for-44 shooting, nine 3-pointers, 15 rebounds and nine blocked shots. He flies back to France on Saturday, and the next time he plays in the U.S. there likely will be an NBA logo on his jersey, presumably after he becomes the No. 1 pick in the 2023 NBA Draft.

“It’s very, very special for France,” Metropolitans 92 coach Vincent Collet said. “Not only for France. He has huge potential. He’s a huge talent.”

The reviews are in from this two-game Vegas residency for Wembanyama, who stands 7-foot-3 in bare feet, and they were of the raving variety. The best of the bunch may have come from Los Angeles Lakers forward LeBron James, who suggested that calling Wembanyama a unicorn might not fully indicate how unique he is.

Instead, James went with an out-of-this-world comparison.

“Everybody’s been a unicorn over the last few years, but he’s more like an alien,” James said. “No one has ever seen anyone as tall as he is but as fluid and as graceful as he is out on the floor … He’s, for sure, a generational talent.”

Yes, all those things happened.

The scene: Gobert and fellow Minnesota Timberwolves standout D’Angelo Russell, in town to play the Lakers in a preseason game later Thursday, decided to postpone their afternoon nap — a staple of the NBA gameday routine — and make the 20-minute ride from Las Vegas to watch the game, arriving at halftime.

Gobert made a quick appearance on the game’s televised broadcast. Wembanyama, standing nearby, stuck one of his massive feet into the path of a pass by Ignite center Eric Mika. The ball ricocheted into the monitor near Gobert’s seat, knocking it over.

Gobert raves about Wembanyama, who almost certainly will be the first top-five draft pick from France. And he doesn’t think there’s any real comparison: Gobert said Wembanyama’s defensive instincts remind him of himself, while his ballhandling and shooting remind him of Kevin Durant.

Thursday’s game had a bit of a scare, and the other top NBA draft headliner in this showcase got the worst of that moment.

Scoot Henderson, the guard whose 28 points led the Ignite to a 122-115 victory on Tuesday night in the exhibition opener, left Thursday’s game after less than five minutes. The reason: He banged knees with Wembanyama.

Henderson switched onto Wembanyama, who was dribbling on the wing. Wembanyama made a move, collided into Henderson and tumbled to the court, looking initially like he got the worst of that exchange. But Henderson, who was called for a foul on the play, wound up limping off for evaluation and the Ignite quickly said he wouldn’t be returning.

There are 31 games left on Metropolitans’ 34-game schedule in the French league, and the plan — as of now — is for Wembanyama to finish his season, which is slated to go through mid-May. The NBA Draft is June 22.

Bouna Ndiaye, one of Wembanyama’s agents, said some NBA teams might not understand why he’s playing. The reason, he says, is because nobody can get Wembanyama out of the gym.

“He wants to live on the court,” Ndiaye said.

What these two games showed, in many ways, was just that the tapes of Wembanyama that have been coming out of Europe over the last few years weren’t lying. He needs to get stronger. There’s much he can still polish. He is, by all accounts, exceptional already.

“Just before we came in last Saturday, we had a meeting with our doctor and we are going to prepare to plan the next two months to increase what he is doing, besides the court, to strengthen the body,” Collet said. “We’re always careful also with how much time he is practicing, not to go too far. … We plan so that we limit the risk.”

When Thursday was over, when the comeback was complete, Wembanyama briefly lifted his arms skyward in celebration, then shook a lot of hands, partook in a lot of hugs and posed for a lot of pictures.

And later Thursday, he went to that Lakers-Timberwolves game, sitting near the Lakers’ bench, just a few feet from James and Anthony Davis. It was a great view. His view next year will be a bit better.

“I’m still excited and so happy about it,” Wembanyama said. “I know I’m so lucky to have this chance.” 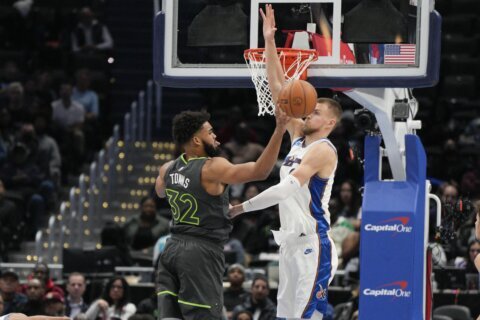