Murray, Porter on mend, eager to provide lift next season

DENVER (AP) — The late-season images were a source of confusion: Jamal Murray taking the floor before games and dunking on a surgically repaired knee. Nearby, Michael Porter Jr. launching his smooth long-range jumper following spinal surgery.

They painted a picture of the talented Denver Nuggets tandem on the cusp of returning to action. But the stark reality was they weren’t all that close to rejoining MVP Nikola Jokic on the floor.

Not physically. Not mentally. Not to compete on the playoff stage as the Nuggets were eliminated by Golden State in five games.

Now, they have an entire summer to completely heal — Murray from the torn ACL he suffered last April and Porter from another back surgery — and get this team back to where they envisioned.

“We can be the best team in the NBA,” Porter said Friday, “when we have everybody healthy.”

It was painful for Murray and Porter to watch from the sideline down the stretch and into the postseason.

Murray estimated he was around 85% back to top form. Sure, he could dunk, shoot and drive. But it was the other basketball situations that concerned him, like guarding, say, Stephen Curry, rebounding, running through screens or diving for loose balls.

For Porter, he said he could’ve perhaps played: “On one leg and stand in the corner and shoot 3s,” he cracked. “Would I have been at my best? I definitely would not have been at my best. At that point, it’s just thinking long-term versus short-term.”

The Nuggets understood. They floated the idea of a return down the stretch or in the playoffs simply to give them the option whenever they felt ready.

“When there’s an injury, the player has to have the loudest voice,” Nuggets president of basketball operations Tim Connelly explained.

Murray listened to his knee and how it was feeling even if he was cleared to return. He heard it from angry fans, too, about sitting out. They wondered why he couldn’t take the floor. He even took to social media to defend himself.

“They hear the word ‘clear’ and they’re like, ‘Why aren’t you playing?’” said Murray, who came up big when the Nuggets advanced to the 2020 Western Conference Finals inside the Orlando bubble. “I have some really great days, or there’s no soreness, and I feel like I can go. Then you have the day right after that, where it’s like … not there yet.

“Those good days I’m on my high horse and really looking forward to the future. But then those slow days, it’s tough to see the future after that. It’s tough to plan and tell you how good I am. The uncertainty is tough when you’re not sure how your body’s going to react.”

The same sort of thing with Porter, who had surgery at the University of Missouri and came back later in the season for the 2018 NCAA Tournament at “40 or 50% of myself,” he recounted.

“I don’t think that was the smartest thing looking back,” Porter added. “So I try to learn from that experience, and play the long-term game.”

Porter played in nine games this season. He had a setback in March — trying to ramp his rehab up too quick — and decided to go back to the drawing board. He revamped his biomechanics and the way he moves on the court to address what may be causing his back issues.

“I’m trying to be very careful and very cognizant of how I treat this rehab process because, for me, it’s all about just being healthy,” Porter said. “I think I can take off from there and string a long time of being healthy together.”

Porter had a confidant while he healed — Murray.

They grew close as they went through rehab, a bond they said could carry over to the court next season.

By sitting out, Porter and Murray also got to see what’s needed of them when they do return.

“When you’re in it, you’re so focused on what you can do,” Murray said. “But when you sit back and you watch the whole season, and they have to play a different way, it’s like, ‘OK, well I see where I can interject myself and really make it easy on everybody.’”

Murray knows the ideal acquisition to push the Nuggets to the another level next season.

NOTES: A priority this summer for the Nuggets will be working on a supermax deal for Jokic, who averaged 27.1 points, 13.8 rebounds and 7.1 assists this season. He could be looking at one of the biggest deals in league history. “There’s nothing more important organizationally than to make sure Nikola stays here as long as he wants to play the game,” Connelly said. 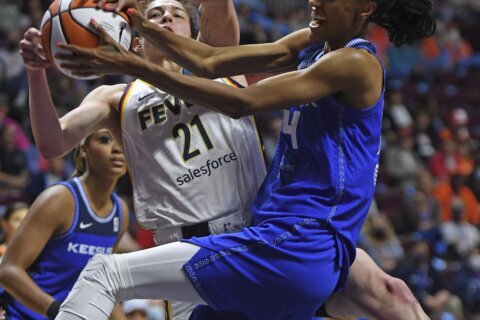