Joel Embiid had 19 points and nine rebounds for Philadelphia. Shake Milton scored 16 points and Georges Niang added 14 off the bench.

“This group is really close, they don’t have any distractions, and they play hard,” Sixers coach Doc Rivers said.

They weren’t able to have a walkthrough on Thursday morning after Isaiah Joe’s entry into the COVID-19 protocols required the entire team to be tested.

“We have gritty guys who are just here to win basketball games,” Niang said. “We came in here on the second half of a back-to-back after a tough win against Chicago plus everything this morning and got a win. This is a big team effort.”

Jeremi Grant scored 27 for the Pistons, but only five in the second half.

“In the first half, we ran our offense and the ball got to Jeremi for some good shots,” Pistons coach Dwane Casey said. “In the second half, everyone came out and waited for Jeremi to do his thing. We can’t play like that and expect to win.”

“I feel a lot more comfortable with the ball, but I obviously haven’t been efficient shooting in my first three games,” said Cunningham, who missed the preseason and the start of the regular season with a sprained ankle. “I didn’t have a training camp, but the guys are supporting me and they keep getting me the ball.”

Cunningham beat the shot clock from the center-court logo with 7:20 left in the third, his first make after missing his first 18 career 3-point attempts.

Maxey, playing on his 21st birthday, had nine points in the third quarter as the 76ers took a 86-82 lead.

“I wasn’t ready to be doing that when I was 21, that’s for sure,” Curry said. “But once you get out there, everyone is the same age.”

“The Sixers are a playoff team and we knew they were going to turn up the heat in the second half,” Casey said. “We didn’t match them. That’s what hurt us.”

Embiid ended the run with a short jumper, and the Sixers turned two turnovers into easy baskets to make it 103-89 with 5:46 left.

Sixers: C Andre Drummond, who played his first 591 NBA games with the Pistons, was booed every time he touched the ball. … Embiid’s three first-half rebounds gave him 3,000 in his NBA career.

Pistons: Olynyk stole the ball from Drummond and hit a 27-footer at the buzzer to give Detroit a 32-31 lead at the end of the first quarter. … PG Killian Hayes left the game with a left thumb injury, but returned for the last 6:29. 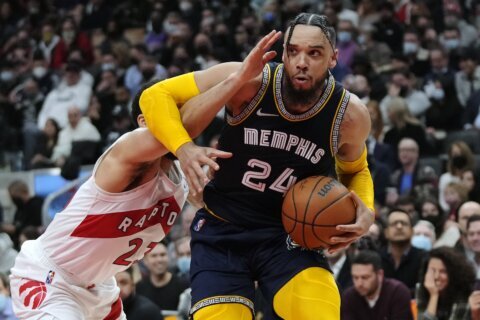 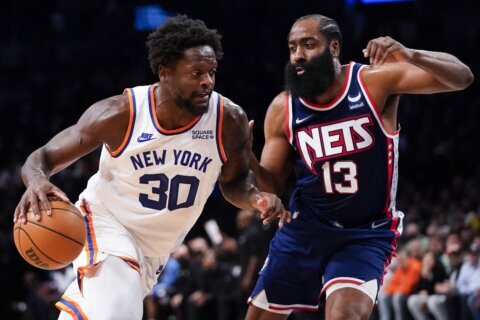 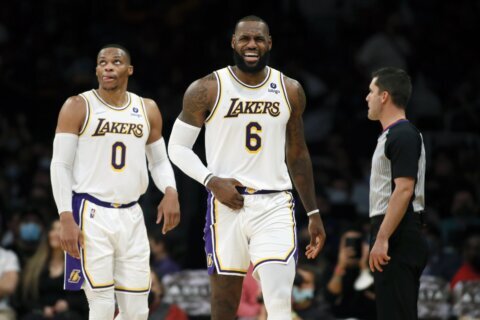