To the rest of the Utah Jazz, he looks just like himself.

Mitchell scored 10 of his 29 points in the fourth quarter and the top-seeded Utah Jazz beat the Memphis Grizzlies 121-111 on Saturday night to take a 2-1 lead in the first-round playoff series.

This was the second game back for Mitchell, who missed the final 16 games of the regular season and the first game in this series with a sprained right ankle. He was a bit more stoic in this game, and he said it was to help preserve himself for the end of games.

“It’s a long game,” Mitchell said. “It’s been a while and just getting back into it. That’s really it. Understanding that trying to save your energy as much as possible, not needing to be as exuberant, I think that’s the right word to use, but I think just not being as loud and kind of demonstrative in my movements.”

Conley, in Memphis where he started his career, matched his regular-season and playoff career highs with seven 3-pointers and finished with 27 points.

Game 4 is Monday night in Memphis.

“When you have a guy that has that much belief in his teammates and that competitive fire, you know he’s going to make some things happen,” Utah coach Quin Snyder said of Mitchell. “He’s not going to be successful in every possession, but he was not going to be deterred either.”

Memphis coach Taylor Jenkins was more unhappy at how the Grizzlies played the first quarter than the fourth.

“They made the plays down the stretch,” Jenkins said of the Jazz. “Couldn’t get the stops. A couple of and-1s.. The first quarter, we just didn’t have the discipline. … Too many breakdowns, and they made us pay.”

Memphis increased capacity to 55% inside FedExForum, and the 12,185 fans were very loud for the franchise’s first home playoff game since April 27, 2017, when Conley was the Grizzlies’ point guard for a seventh straight postseason berth.

After three people were banned by the Jazz for racist and sexist comments to Morant’s family during Game 2, these fans booed every member of the Utah starting lineup except for Conley in his first postseason game in Memphis against the team that drafted him at No. 4 overall in 2007.

Utah scored the first four points and led 34-22 after the first quarter. Every time Memphis tried to eat away at the lead, the Jazz answered with another 3. The Jazz made 11 3s in leading 62-51 at halftime.

Valanciunas, who averaged 17.1 points and 12.5 rebounds during the regular season, didn’t score his first backet until early in the third quarter. He scored the first 10 of the quarter pulling Memphis to 68-61, and the Grizzlies got within four on a pair of free throws by Morant with 4:05 left.

The Jazz answered with eight straight and led 96-85 after the third quarter.

Grizzlies: Memphis came in having won eight of its last 10 overall. The Grizzlies now are 6-2 over their last eight Game 3s, with this loss joining 2016 when they were swept by San Antonio. The six wins? All came with Conley on the roster.

The Jazz announced the death of Mark Eaton, the two-time NBA Defensive Player of the Year, earlier Saturday. Gobert was close to Eaton and visited the big man at his home only a few days ago. He said Eaton probably would’ve texted him after this win, complimenting how he protected the paint.

“I feel his presence, and I definitely had to come out tonight and make sure I was helping the team get a win,” said Gobert, who also had four blocks.

“Cherry on top would have been the win. Still learning. Still figuring it out. … Try to make a little bit more adjustments. We’ve got to be ready to come in and play desperate. We’re down 2-1, and we ’ve got to find a way to scrap out a win on our home floor,” Brooks said. 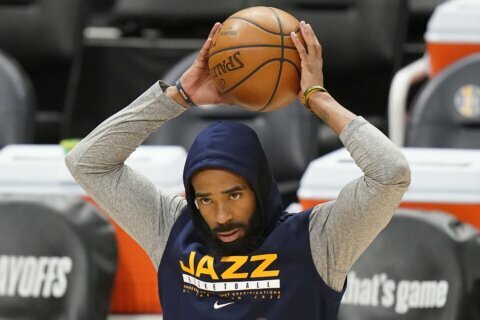 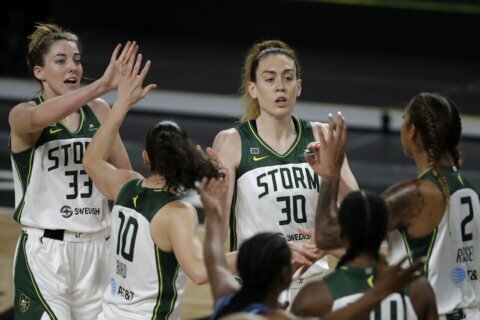