DALLAS (AP) — Luka Doncic and the Dallas Mavericks no longer have to worry about that NBA play-in tournament. They are guaranteed a top-six finish in the Western Conference.

“That’s great. … When we were in the 12th or 13th spot, everybody had us out of the playoffs,” Doncic said. “But now we’ve made the playoffs. We’re going to have a couple of days off, and that’s what we needed.”

Doncic had his 11th triple-double of the season with 20 points, 10 rebounds and 11 assists as they held on to beat the also-ran Toronto Raptors 114-110 in their regular-season home finale Friday night.

The Mavericks (42-29), who had a 9-14 record on Feb. 4, have won nine of 11 to move a season-high 13 games over .500. Being in the top six means an extended break before the playoffs start after a condensed regular-season schedule, though with 10 fewer games than usual, because of the pandemic.

“Avoid the play-in is significant, it’s important. There’s just too many advantages to not being in the play-in situation,” coach Rick Carlisle said. “So I’m happy for our guys. They worked hard for this.”

Kristaps Porzingis, who had 21 points and 10 rebounds, made a 3-pointer on the game’s first shot and the Mavs never trailed, though the undermanned Raptors cut it close late. Toronto used only seven players, going without its top seven scorers — mostly because of injuries, but also with the season winding down and the Raptors out of contention for even a play-in spot in the East.

Toronto, which trailed by 19 points early in the second half, was within 105-102 on Malachi Flynn’s 3-pointer with three minutes left, which followed a Mavericks turnover after his layup.

Dorian Finney-Smith responded to Flynn’s 3 with one of his own for Dallas, and Doncic then drove for a one-handed slam. Doncic had earlier rebounded his own missed short jumper and followed that with a nifty layup.

“Let’s just find ways to keep getting better, keep sticking together and keep grinding out wins like this,” Mavs guard Jalen Brunson said. “It isn’t going to be pretty, but we’ve got to grind out wins.”

Raptors rookie Jalen Harris, a Dallas native making his second career start in as many nights, had 31 points to lead Toronto. Flynn had 26 points.

“I think it’s valuable for us to get these guys some early development and to learn more about them,” Nurse said. “It’s giving us a golden opportunity. They’ve had some ups and downs, and they keep playing and bouncing back.”

The Southwest Division-winning Mavericks are in fifth place in the West, with a one-game lead over Portland (41-30) for the No. 5 seed with one regular-season game remaining for both teams. The Trail Blazers have the tiebreaker if they finish with the same record because they won two of three against Dallas this season.

Teams finishing seventh through 10th in each conference are forced into play-in games next week to determine who advances.

Brunson, who had 19 points, left the game late in the third quarter, and then left the floor for a few minutes. Carlisle said Brunson took a knee to the tender area inside of his knee.

“Probably iced it real quick and rubbed it out,” Carlisle said. “He came back out and was OK to play, which was important.”

Toronto rookie forward Freddie Gillespie from Baylor got his first career NBA start, and it came on a night when the Baylor coach Scott Drew and the national champion Bears were in attendance to be recognized by the Mavericks. Dallas County officials declared May the month of the Bears in the county. Gillespie finished with four points, seven rebounds and one blocked shot.

Raptors: Stanley Jonson had a double-double with 15 points and 10 rebounds. … Toronto extended a franchise record with its 37th different starting lineup this season. It was the ninth game in a row they used a different starting five.

Mavericks: It was the 36th career triple-double for Doncic, who is 11th on the NBA career list. He is still seven behind Fat Lever for the top 10, but now three ahead of Bob Cousy. … Finney-Smith finished with 17 points. … Dallas had lost 12 of its previous 16 games against the Raptors, including 116-93 in Tampa on Jan. 18. 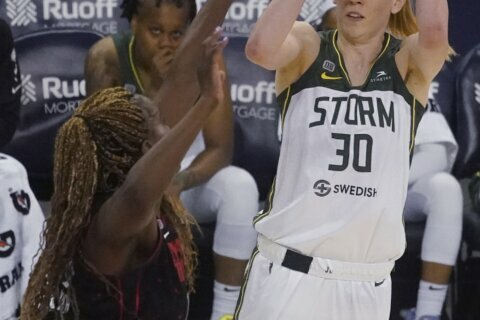 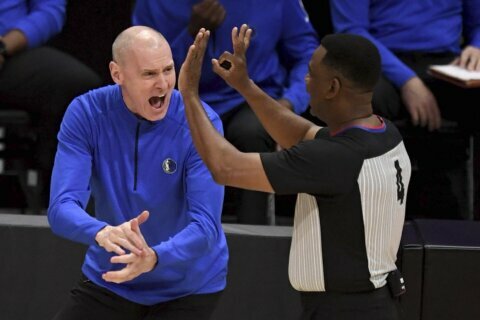