Philanthropist MacKenzie Scott says her donations have yielded more than $14 billion in funding for about 1,600 nonprofits since 2019, according to her long-awaited website Yield Giving, unveiled Wednesday night.

Scott also announced that she plans to introduce an “open-call process” that allows nonprofits seeking donations from her to send information to her for evaluation. Until now, Scott and her team secretly contacted organizations that they were interested in first, then offered unrestricted donations after receiving the group’s data.

“Information from other people – other givers, my team, the nonprofit teams I’ve been giving to – has been enormously helpful to me,” Scott wrote in a new essay. “If more information about these gifts can be helpful to anyone, I want to share it.”

The website name plays on two meanings of the word “yield:” to produce something positive and to give up control, which together represent Scott’s approach to giving.

“What we have seen from a lot of big donors, big foundations, billionaires is a very top down approach that assumes that the donor knows best, that sees nonprofits sometimes in a negative light,” said Phil Buchanan, president of The Center for Effective Philanthropy, which has studied Scott’s giving.

Scott’s approach falls on the other end of the spectrum, he said, “which is to say, ‘We as donors can yield to those talented people in nonprofits working closest to communities who know best what is needed and how to do it.’”

Some of the donations on Yield Giving have not previously been disclosed, including the single largest gift reported — a $75 million gift to the organization Co-Impact’s fund that supports gender equality and women’s leadership globally. Scott, and her then husband Dan Jewett, had been listed among the fund’s donors, but the gift amount had not been published. Co-Impact did not immediately respond to a request for comment.

Another $40 million donation to the nonprofit consulting group that has helped Scott vet and select recipients of her donations was also disclosed.

“While we are an advisor of Scott’s on her philanthropy, we did not have prior knowledge of or involvement with the decision to include Bridgespan as a grant recipient,” The Bridgespan Group said in a statement Wednesday. The group has posted a list of donors who gave to it in 2022 on its website, though it said in the statement that it does not “have a practice” of announcing donations.

Nonprofits disclose information about who funds them in tax forms submitted to the IRS that are eventually made public. But the pandemic has contributed to delays in processing forms from 2020. The disclosure by Scott of this information about her donations helps increase transparency around her giving.

Scott has signed The Giving Pledge, promising to give away more than half of her wealth, which largely comes from her divorce from Amazon founder Jeff Bezos. Scott, whose net worth Forbes currently estimates at $27 billion, has not given any interviews about her donations, opting to discuss her reasons in a handful of essays that she posted on Medium and now on Yield Giving.

On the site, Scott writes that she and her team evaluate organizations by analyzing their “potential for sustained positive impact,” including their finances, history, measurement of outcomes, and if they have “experienced leadership representative of the community served.”

Scott says the “open-call” process she plans to start will focus on specific types of organizations or certain locations. She plans to post criteria for eligibility and selection, as well as naming the panel evaluating the applications publicly.

Scott promised to release the database of donations in an essay in March 2022, saying the site would not go live until “it reflects the preferences of every one of these nonprofit teams about how details of their gifts are shared.”

Buchanan said his organization, which has received a gift from Scott, received a short form in September asking how they wanted to be listed on the website, their mission, geographic area and whether they wanted the amount of the donation disclosed.

The anti-poverty nonprofit GiveDirectly was also aware that Scott’s website would list her $60 million gift to its Project 100+ program in 2020, as the second-largest reported gift to a single organization, said Tyler Hall, GiveDirectly’s director of communications. The Project 100+ program provided $1,000 payments to nearly 200,000 American households in need during the early days of the COVID-19 pandemic.

Hall hoped being listed on Scott’s website would be a “signal boost” for the nonprofit as an organization doing good work and that it has a good idea.

“Giving money directly to people who are in poverty is a great way to help,” Hall said. “We could move $500 million dollars if we were given that in a year because there’s so much need. And this can be targeted and distributed so thoughtfully and so quickly.”

However, some organizations, including Habitat for Humanity International, said they had not been contacted by Scott’s representatives specifically about posting content to her website.

Easterseals and its affiliates, which collectively received $162 million from Scott in 2020, also said they had not heard from Scott’s representatives about the website, but say it has submitted extensive reporting about their use of the funds.

“We remain grateful for Ms. Scott’s generous philanthropy and will continue to impact the lives of people with disabilities, including veterans and seniors, through her transformational support,” Sharon Watson of Easterseals said by email. 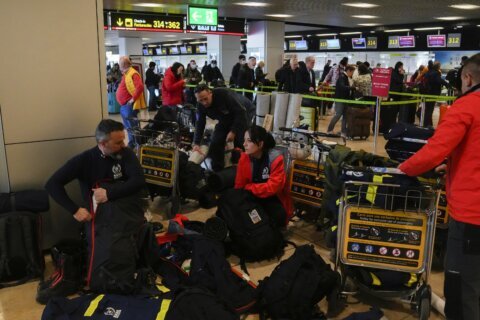